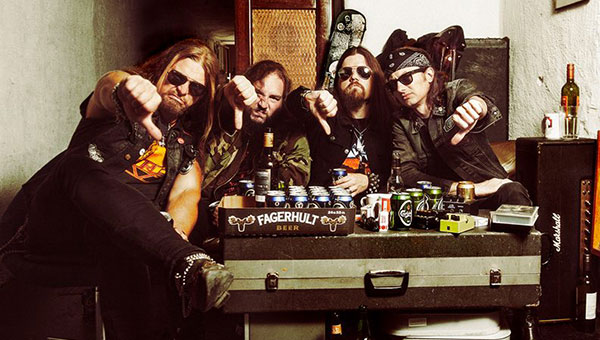 The bad news: it's been nearly twenty years since Swedish street metal act Gehennah has released a new full-length. The good news: next month they will. The new album is appropriately titled Too Loud To Live, Too Drunk To Die and will be available on February 12 through Metal Blade Records.

Launched in 1992, the quartet exploded onto the scene with their raw, thrashy, and raucous brand of metal, a recipe inspired by everyone from Motorhead to Bathory. After releasing several albums in quick succession, Gehennah adopted a more measured pace. It's now 2016, and their fans have waited long enough for a new studio album. Too Loud To Live, Too Drunk To Die is a 13-track effort overflowing with drinking anthems and unvarnished tales of rebellion. The world is a fucked up place, and Gehennah has its soundtrack at hand.

Today we're pleased to unveil a new song from the album titled "Life Metal Must Die." Stream the track below, and while you're bobbing your head, pre-order Too Loud To Live, Too Drunk To Die here.

this is just bad... period.

There is only one real Gehenna, and this sure as shit ain't it.

Wow, wonder how much Slagel paid LG for them to persuade people to "pre-order" this filth. Slagel continues to push shitty old hags hoping to get his investment back. Retire already

^ see you in hell maybe? While eating dinner with Osama Bin Laden

I f*cking love this, everyone else can f*ck off

If you don't get what's so cool in Gehennah just leave Metal to someoneone adult...