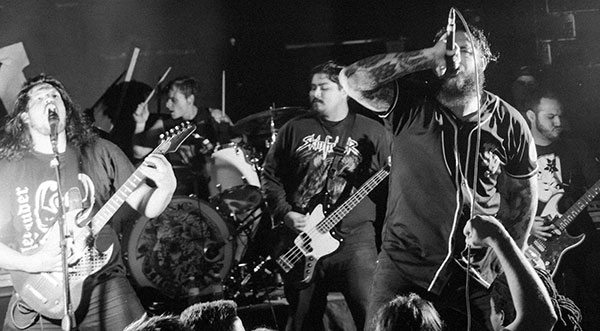 In case you haven't heard, Southern California band God's Hate will release their debut full-length in just a few weeks. The nine-song album is titled Mass Murder and will be available on February 5 through Closed Casket Activities.

If you're not familiar with God's Hate, since forming two years ago they've put out a pair of well-received EPs and their metallic hardcore output is officially described in this manner: "Their modern approach to a classic metallic hardcore sound recalls genre favorites Hatebreed and Merauder, while injecting elements only a contemporary band could provide."

Sounds promising, right? Today we're pleased to premiere the album's title track. Stream the song below and if you dig it, you can order Mass Murder online.

This band sounds like dogshit. They only have hype behind them because of Twitching Tongues and Nails. The vocalist sounds like he is gurgling blood with being constipated.

Hard!! Nobody in Gods Hate plays in Nails.

Shut up sounds like dog shit you fool! This hard you'd get knocked out in that pit

your way better off listening to Vulgar Display TX

Vocals sound like when bands give the mic out and some grunt tries his best to warp his prepubescent squeak into a slightly man growl....and fails. Also, neck beards.

I bet the drummer from Ancient VVisdom slays vag.

Ruckus 2.0 Hey, let's not bring Ruckus into this.

the singer is a cry baby try hard. can't sing looks like the tall dude from space jam