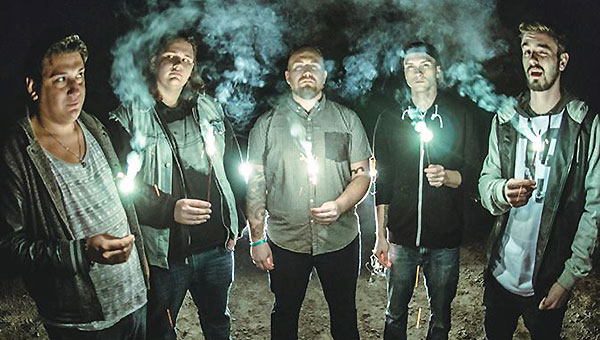 Several months ago, Bullet Tooth announced the signing of Chicago, IL collective Knockout Kid. In case you missed it, the band plays an aggressive blend of pop punk and hardcore that will almost certainly appeal to fans of acts like Four Year Strong and A Day To Remember.

With the dawn of the new year comes the news that Knockout Kid's new album, titled Manic, will be available on February 26. To coincide with the announcement, we're pleased to unveil a brand new track from the effort called "Jurassic Park After Dark." The song features Trey Sexton from Kid Liberty and can be streamed below. While you're jamming, we encourage you to pre-order Manic and follow Knockout Kid on Facebook.

Comeback Kid is not stoked

Why the f*ck would you ever name your band of a similar genre something SOOOO similar? WHAT THE f*ck

This would've been bad when this style was relevant

The person above has no idea what they are talking about

this album is gonna rule

loved it, hope there's more riffing like this on the rest of the album!

SOOOOOOO good!!!!!!!!!! All these haters are low brow Neanderthals who listen to nothing but obscure slam metal. Turn it the fffffffff up dudes!!!!!!! -Eric L from One Way!

this shit is f*cking awesome. f*ck the haters. I'll play this shit so god damn loud in my car, I hope you hear me coming a million f*cking miles away. Knockout Kid is the shit.

So many dudes from this band posting comments. This sounds like it was spit out by a computer. No soul.

I'm such a sucker for easy-core and I'm even more of a sucker for Knockout Kid. The track is great, I can't wait to hear the rest.

I heard the singer's a douche great song though

These dudes vape and roller blade. Song sucks too. Pick a genre and suck at just one.

The #eztakeover2k16 starts off strong with this one

Hella bummer, I only recognize two original members. Might as well go under a new name. Is this even the same band? Tech-no. . get it? Uh. .

so how do we preorder ?

this is hella dope actually. super hyped for the rest of the album

just stop acting like y'all are musicians and get a job

Not my thing, Ive heard worse though.