Why wait for vinyl? Merry Christmas from Harm Reduction. Premieres from Pulled Under, Sentenced To Burn, Renounced, Detain, and Resistance Wire. 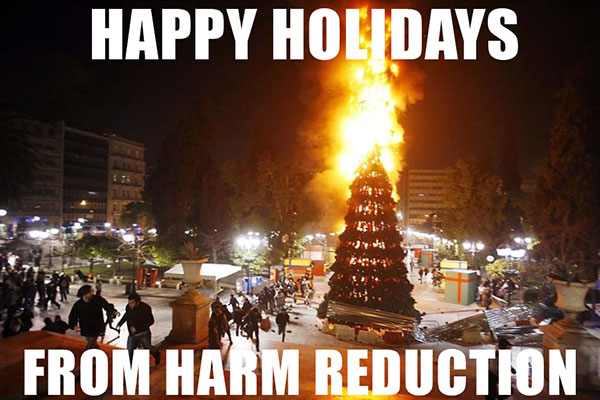 Harm Reduction Records has four new releases in the pipeline. Since it's Christmas time, the label has decided to give you a little present and premiere music from each of the releases via Lambgoat today. You can find information about each release below, in addition to its respective streams. If you like what you hear, be sure to purchase something. Enjoy!

Renounced / Sentenced To Burn - split
Renounced channels the excitement and emotion of the early 2000s into something fresh, earning the band respect from old heads and new kids. London's finest. Sentenced To Burn (formerly DROWN) was been heavy since day one, but the Houston band sets a new bar on this recording. A transatlantic ass whooping of a split. (buy)


Resistance Wire - Demo 2015
For when heavy is not heavy enough, you have Resistance Wire. Precision anger from Pittsburgh. This demo is better than most bands' careers and it only scratches at the surface of what Resistance Wire will become. Listen at your own peril. (buy)

the guys from detain are super into fast food reviews and a guy named gibbons. Really weird

Pretty sure Detain stole a riff from international harvester

Yeah sentenced to burn is filled with pieces of shit

Wish Bold was in this release

This shit is awful.

Pulled Under is by far the best thing here.

Sentenced To Burn front man is the ULTIMATE punisher.

Will Kaelin is chubby and bald.

so many bandmembers commenting.

I just bought all harm reduction records albums for $5 a piece.

I have always liked Detain, I like all Harm Reduction bands. And I think they should all definetly do more stuff.?

I am wearing my Sentenced To Burn shirt now

Pulled Under record sounds so shitty, who the f*ck recorded that and thought it sounded acceptable

Will Kaelin is a gay balding gay bitch

Pulled Under wishes they were Harness so badly lol

who ever picked these bands f*cking sucks, just straight terrible...

f*ck all the other bands besides the only real one. Obviously Detain. f*ck the fake trend pssy shit

Renounced is boring but the rest are sick

heard straight from Texas that STB only did that split with renounced to try and be different. 10/10 music on Sentenced to burns part at least but also 10/10 bad spot choice....try harder next time

How dare Drown change their name to my old bands name....lol