Malice At The Palace EP stream 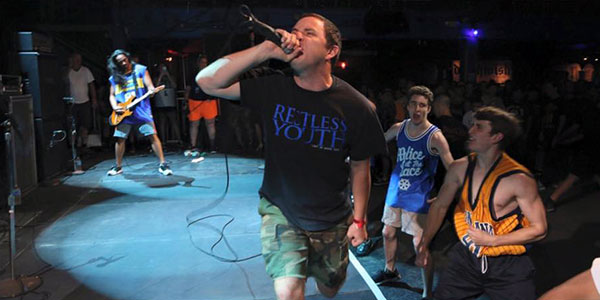 Up and coming Florida metal/hardcore outfit Malice At The Palace will release a new, self-titled EP next month via Six Feet Under Records. If you're not familiar with the band, shades of Merauder and Integrity permeate their bleak offerings.

Today we're happy to exclusively stream the new record below. Six Feet Under will release the EP via a 12" which will feature four new songs on the A-side, and a B-side featuring the band's live set from This Is Hardcore 2015. You can pre-order the release here. Don't forget to follow Malice At The Palace on Facebook.


Tags: Malice At The Palace

This band is full of pussies.

bob wilson is a midget lol

The dude on lead screams is so bad

theanimalcrackers should be the lead scream for this band

this is not a let down.

Do you not understand that thats how the production is supposed to be?? its Slayercore lol raw and dope as hell.

This is literally the most boring thing I have ever f*cking heard. Oompa loompas and the Wonder Years are stoked.

this is god damn incredible

The music is rad, but the vocalists pssy teen voice ruins it.

The lead singer sounds like he's yelling at someone over Xbox Live.

this bands shares members with another band! check it out https://axisfl.bandcamp.co m/

ever since their demo came out like 2 summers ago I always thought this band sounded exactly like suburban scums older material. they must be so stoked they are out of the scene now. this bands about to blow up

f*ck this band, all these pussies talk about is littering white Oakleys.

Spoiler: no one in this band even watches basketball.

that Point Blank beat thing is a fact for sure

Bob Wilson got smacked by someone in Death Before Dishonor in Philly a few years ago and did nothing. He's the actual worst.

does anyone have proof of the point blank thing? I've been trying to tell people about it but they're "good dudes, backed hard" so no one believes me. heard there was a video on twitter @ one point, not sure if it was from then or if it was a different time (hopefully it hasn't happened more than once)

Point Blank absolutely sexually assaulted an intoxicated girl at MWB fest. f*ck that band and all of their friends.

Yo this band rules. I love their vocalists' voice. Way better than hearing the same damn album release over and over again. Besides, with most of these bands, including this band, they are incredible live compared to the recordings.

Yo this band rules. I love their vocalists' voice. Way better than hearing the same damn album release over and over again. Besides, with most of these bands, including this band, they are incredible live compared to the recordings.

zack elmer is a god

regards to anything being said about the Point Blank situation at MWB, I am unsure. But in weeks following I am aware of an incident happening after a show of theirs in Arkansas at a party. Their vocalist (who was drunk at the time) , and another male (who was not a part of the band) took an unnamed female into the bathroom of the house, AFTER the female had been unconscious/blackout drunk on the couch 10-15 minutes prior.

The events that took place in the bathroom were not consented by the female, and all recollection of the event was made known when a video was posted the following day on Twitter by another member of the band stating "My friends got some chill last night laugh my ass off almost mocking the situation that happened (member is no longer affiliated with the band since). Shortly after, the video was then taken down.

When brought to people's attention, it was made aware that the video was being passed around in group chats despite others saying they had no idea the video was made. The entire situation has been swept under the rug for far too long despite handfuls of people knowing. Not all members in the band are guilty/associated with the incidents that took place.

This is so f*cking sick.

Music for men, played by boys. Better eat your Wheaties.

Heard they paid Santana to record the solos for this EP

This band is horrible and the vocalist is a douche bag.... Just stick to working your dead end jobs because this band is pure shit.

Sometimes I fart on my fingers and then suck them. My body says no, but I do it anyway. MATP makes me feel like that.

These motherf*ckers are so self centered. One of them even has a band named after his f*cking dick!

"These motherf*ckers are so self centered. One of them even has a band named after his f*cking dick!" Is it called Let Down?

Bob Wilsons handing writing is one of a two year old at best.

Jordan from Drown won't do shit to Ian Heavy Chains

They were named after an episode of the Three Stooges?

y'all will hate on anything. this new shit is tight

Listen to Unified Right and Axis instead

All of these dudes f*cking suck.

All Out War is releasing an album soon. Listen to that instead.