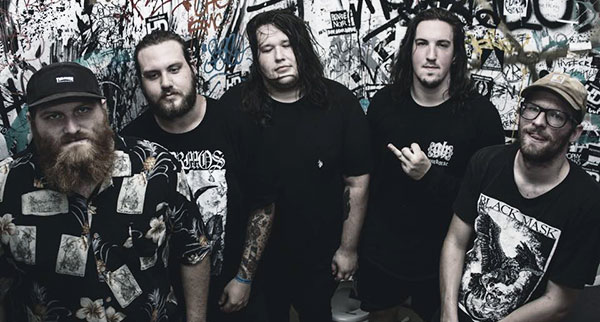 When you think of West Virginia, hardcore music probably isn't the first thing that comes to mind. But that doesn't mean that it isn't alive and well there. Witness Charleston, WV hardcore/metal band Left Behind. As rugged as their state's reputation, Left Behind's bleak blend of subtle melody and crushing riffs should appeal to many of you.

The band will release a new full-length titled Seeing Hell in early 2016. Fortunately, in the meantime they've put together a music video for a new song titled "Convulse." Check it out below and keep up with Left Behind via Facebook (take note of their upcoming shows, as they will soon be on tour with Yuth Forever, 2x4, Sheeva, Varials, and more).

I heard this band butt fu*ks dogs while on tour. No surprise coming from a couple of hilljacks from West Virginia

^ left behind could f*ck a dog and still be heavier and cooler than your gay ass band. f*ckin dork

I hate the way the snare drum sounds...almost as bad as the infamous St. Anger snare drum...

Left Behind are a bunch of virgins

Didn't one of these dudes get caught jerking off in a public park?

I love my big brother soooooooo much. He's the coolest!!! -Jorgie

Damnnnnn, one of the hardest working bands out there. Muy bueno.

This sucks ass, talentless hacks riding on an image they saw on Twitter once

This band rips harder than yours in every way possible

dudes who still have eyebrow rings are stoked

I would rather have a Llama gnaw off my testicles and have acid poured into the wound than pay any dollar amount to attend or purchase anything this band puts out.

This song is slightly better than Burger King's Chicken Fries

This is the feels. Diggin it

wow this was awful, sounded like a bad rip off of harm's way the first EP made me fall in love with them, this shit has me depressed

I'm cool because I talk shit on lambgoat.

I'm cool cause I defend shit bands on lambgoat

I'm cool because I have a barbed penis like a cat.

Honey Badger is not impressed.

None of these dudes get laid on tour.

You know a band is bad and has 0 taste when one of the members wears a Black Mask shirt.

Pretty badass. Hey haters, when your bands video makes it onto LG (and it won't) we'll talk mad shit about you too

Liked this band before the white Nutty professor became vocalist and sounds like he's shitting the whole time. But, at least now everything else sounds like its shitting with him. Song blows. -6/10

Jesus christ, I guess the suckers of this world gather on this website. Eat a dck you f*cking losers.

Saw them live and it was awesome, solid and mean