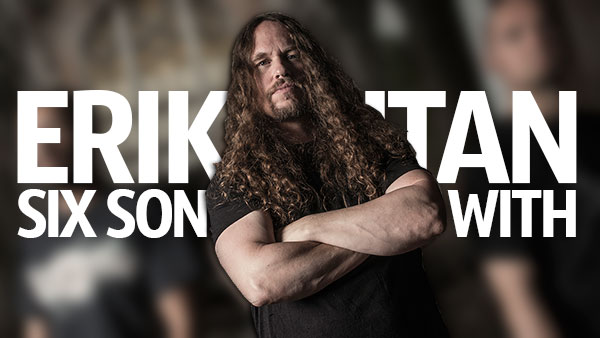 Few individuals have dedicated their life to metal to the degree that Erik Rutan has. In addition to founding and fronting Floridian death metal veterans Hate Eternal, who are fast approaching their 20th anniversary, Rutan also did significant time as a member of Morbid Angel and Ripping Corpse. And when he's not plucking strings and screaming, Rutan is turning knobs as a prolific producer and engineer. Operating his own recording studio in Florida, Rutan has helmed albums from a slew of notable metal and hardcore acts, including Cannibal Corpse, Belphegor, Agnostic Front, Six Feet Under, Madball, and Soilent Green.


Erik Rutan: Too many songs to choose from! How would one survive on a deserted island without Maiden? Seriously… Iron Maiden was one of the first metal bands that made me an absolute metalhead and inspired me to one day become a guitarist. The incredible guitar playing with its harmonizing rhythms, dynamic melodies and amazing solos, the deafening bass, incredible drums, powerhouse vocals and fantastic songwriting made me an instant megafan. I remember going to the record store as a 10 year old kid and seeing Iron Maiden's first album, looked at the cover and bought it right then and there. Upon one listen from then on I was Maiden for life!


Erik Rutan: Slayer, being one of the bands that inspired my musical beginnings in extreme metal, it would only make sense to hear it at my end. I, as well as many musicians, would not be playing death metal without Slayer. When I heard Slayer for the first time at 14 they truly inspired me to want to write the most evil, aggressive sounding music and lyrics I could come up with. Slayer changed everything for me and made me realize I was destined to create extreme music. I got to tour with Slayer on the Pantera tour when I was in Morbid Angel in 2001, playing arenas all across North America. The ultimate dream come true for me. Being stranded on that island reality would begin to set in. As I begin to prepare to face my fate I would ponder on finer memories……


Erik Rutan: Let's face it, if you are stranded on an island you would need some Hatebreed. For me Hatebreed's Satisfaction is the Death of Desire and Perseverance are two albums that are mandatory if you like metal and/or hardcore. I never get tired of listening to those albums. Would I accept death on that island? Or would I summon up my inner Tom Hanks via "Castaway." WILSON!!!… If the latter, I would definitely need something to motivate me and jack me up. Listen to Hatebreed and with 100% certainty you are pumped up!


Erik Rutan: Purported to be Mozart's only movement of his Requiem Mass in D minor that he fully composed and completed upon his own untimely death. Mozart was a very prolific composer during his 35 years of life. To think Mozart was commissioned to write this piece all the while sick and on his death bed is astonishing to me. It is deep, haunting and downright devastating. Listening to this on that island would be my preparation for the inevitable…


Erik Rutan: I grew up listening to classical music in a family that many played instruments like the piano, cello, etc… I played the violin as well as a young child. Classical music really helped shape me at a very young age into the musician I am today. Considering this would be at the final part of my life on this stranded island, I would want to hear something that brought me back to some of my earlier memories of life. This piece is absolutely one of the most somber pieces of music I can think of. This would be my funeral dirge, signifying the very end.

Great choices....see Ya on tour!

Those are great choices. I think I would go for Bach: Passacaglia and Fugue for my final song though…

Total respect for this man. Only...HATEBREED???