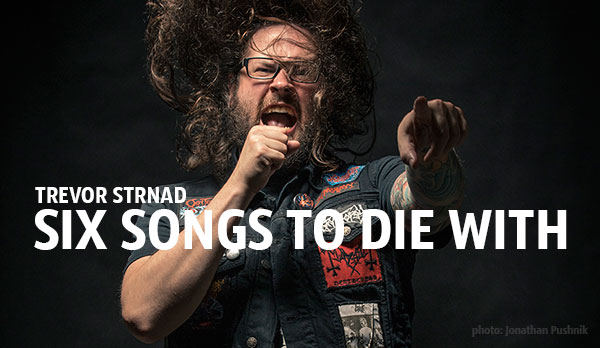 The Black Dahlia Murder have been mainstays of the U.S. death metal scene for nearly fifteen years. While many of their peers attempt to repeatedly reinvent themselves, BDM has never significantly deviated from their trademark blend of melodic death metal. Their blistering songs and workmanlike approach have garnered the band respect, loyalty, and an impressive level of commercial viability for an extreme metal act. As such, we should have cornered refreshingly candid frontman Trevor Strnad for his Six Songs To Die with several years ago, but better late than never!

"Ashes In Your Mouth"


Trevor Strnad: This is the greatest Megadeth song ever written, and probably the most underrated. It comes from Countdown To Extinction, which was the first metal record I fell in love with. It all started with seeing "Symphony Of Destruction" on MTV after I got home from my first day of sixth grade. what I saw and heard that day blew my nerdy little mind and I knew priority number one was getting my hands on that album as soon as humanly possible.


Trevor Strnad: People have dogged on my for this being my favorite Yes album. Fuck those people… all of them. 90125 is an incredible record that I know of because of my dad playing it a lot when I was a kid. Many years later, when I was about 20, I heard the album playing in a record store and realized I knew every part and every word, and that I liked it very much. Since then it's been in heavy rotation. It's hard for me to pick a song from this album, but the guitar on the chorus for "Changes" is just straight up headbangable.

"A Sutra Of Wounds"


Trevor Strnad: Code's Resplendent Grotesque is my favorite black metal record, and still the best metal record I've heard since it came out in 2009. Two albums later and I am still gutted that Kvohst is no longer the singer. You may recognize his croons from dark rockers (and Pitchfork favorites) Beastmilk and Grave Pleasures, but in my mind, he has always belonged as the vocalist of Code. This song emotes so well, it makes me want to burst in to flames when the chorus kicks in.


Trevor Strnad: Oh wow, Nada Surf, that "Popular" band? Yes, that's them. Little do most people know, Nada Surf is still trucking and has made some phenomenal indie rock albums in the last 15 years that have little in common with the single they remain known for. I love Matt Caws… I think he's a genius. He has a way of communicating the struggles of the human experience in song that I find irresistible. I can't tell you how many times I have sang this song in the shower. When I saw them in 2003 I lost my mind... I wept uncontrollably like a little girl seeing Michael Jackson in 1985. It must have been weird for them to see a guy in a Napalm Death Harmony Corruption shirt reacting in such a way to their music, but I just found it so moving.


Trevor Strnad: Weezer is still my favorite non-metal band. By now, they've made a grip of horrible albums but the first three (and the b-sides from that era) are solid gold. I actually spend more time listening to the b-sides than the albums these days.


Trevor Strnad: Not the most known Beach Boys song, but goddamn is it a good one. The acapella ending is dynamite… gets me every time.

Isn't this the dumb fvck with a Carcass tattoo?

I don't love everthing here but still a good list! whats life without a lil variety, people who listen exclusively to metal must be really sad

another metal dude who doesn't listen to metal. of course.

i remember reading this list and seeing that my idol actually had great music taste outside of death metal. RIP Trevor.