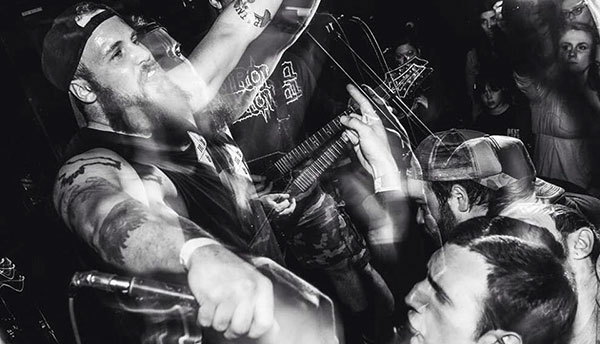 In case you missed the news, Nebraska hardcore band Purgatory will soon release a new 7" EP titled Gospel of War. The outing was recorded by Andrew Nelson (Harm's Way, Discourse), mastered by Brad Boatright (Xibalba, Code Orange), and will be available this fall via Escapist Records.

Formed in 2011, the five-piece band has played throughout the U.S., including shows with Terror, Merauder, and Ringworm. Their brand of metallic hardcore should appeal to anyone who likes their music appropriately brutal. But if you'd like sonic proof, just refer to our exclusive stream of the band's new song "Death Toll" below.

Meanwhile, to check out the band's upcoming tour dates and stay abreast of all things Purgatory, be sure to follow them on Facebook.

all of Nebraska is stoked

0/5 Could not even hear the brass section.

i heard the singer is a pssy

Awful version of downpresser that steals all out war lyrics

Do you mean all at war?! That band was great I miss them

These rapscallions sure do make a lot of noise. But I can tell they are enjoying themselves and that's what counts. I'm proud of you Kyle. Love Me-ma

there is no room for grandmas in hXc music. bust your hip right out of her you decrepit old hag.

This jam got me sticky in me knickers. So fire emoji.

I too have heard the singer is a pretty big pssy/f*ck boy.

I partied with some of these dudes and blacked out. Woke up with Hep-C. The song is pretty good though!

They finally managed to put out a song that wasn't a ripped off Bent Lofe riff. Congratulations?

The singers an jerk not a pssy get your body part metaphors right.

Turns out I am actually not a big fan of Prince's new sound...

saw the singer of this band smash a drunk dudes head into a trailer and toss him into a car. True mosh warriors are stoked.

I figured Ironsights would be too busy counting all of their GoFundMe cash to take a stance on the new track.

I don't know who posted, But Ironsights is beyond stoked for these guys. It's great to see some Nebraska dudes getting their name out there!

maybe they will get to play MWB now

Lol at the little kids trying to start Nebraska beef. It's Nebraska. You're not tough. And rip off another band some more while you're at it.

If this song had a dong, I'd let it put it in my dirt button.

Another "cool guy" hardcore band were people who only care about their stupid Internet personality will rave over. f*cking yawn.

I now have AIDS from listening to this gay ass f ag music for f aggots!

I found the cover of Hoagy Carmichael's Dishpan Hands to be derivative, at best.

no penis or salvation

Shit sounds way too much like taproot for me

Another "cool guy" hardcore band were people who only care about their stupid Internet personality will rave over. f*cking yawn. Gosh if I didn't know better I would think you're talking about members of No Zodiac...Oooohhh

nothing new, but I enjoyed

Was the drunk dude getting his head smashed into a trailer at the Marauder show in Omaha?