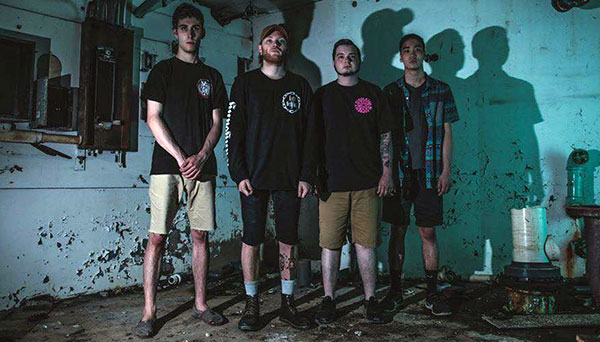 Last month Elmira, NY band Misgiver released their debut EP, titled Loathing, via We Are Triumphant Records. Undeniably crushing, the new record straddles the fence between beatdown hardcore and deathcore. If you like that kind of thing, stick around, because today we're unveiling Misgiver's new video for a track from the EP called "Collecting Coffins."

The band had this to say about the video: "Elmira is best known for calling home to Mark Twain's grave and having quite the dwelling of criminals in its Maximum Security Prison. Both of which reflect its music scene being that it's either dead and buried or locked up, clinging to life, scratching the days away on a chipping wall. Misgiver believes it to be the latter. Yes, the scene has been absent and seemingly lifeless, but its eyes still flutter and fingers twitch from time to time. The 'Collecting Coffins' video shows just that. In a town where you can count the number of active bands on one hand (even if you're missing a few digits) the support and love is abundant. Every face that you see in this video are the reasons Misgiver, and several others, can do what we love amidst a barren local scene. No egos, no enemies. All family. 607"

Well, there you go. Check out the video below, buy the EP here, and keep up with Misgiver on Facebook.

Way to go dudes! Much love from Corning!

joey is stoked on shit admats

Incredible dudes. Working with them was probably the most fun I've had since I started recording.

Seems like a bunch of footage that doesn't match up.

oh my sweet flying f*ck this came out great boys!

Who paid the guitarist of Counterparts to play for this silly, clearly Creed influenced rock band? Leave him alone, he's just a man. Ps, Ryan Force is hot