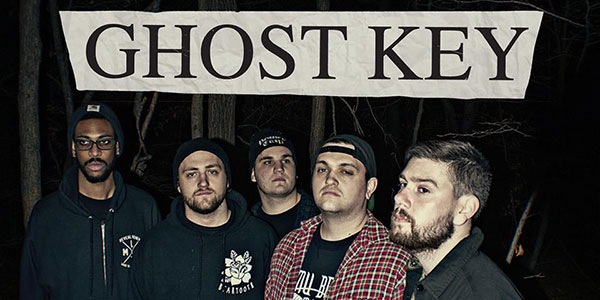 In case you haven't heard, Peoria, IL hardcore act Ghost Key will release their No Sleep Records debut next month. Titled The Things I Am Not, the EP will be available on June 30. Circulated a few weeks ago, a press release for the EP stated, "Armed with an arsenal of ferocious, heavy riffs and attacking vocals, the group delivers a sonic assault on the senses with four songs that get straight to the point." That sounds like our kind of music.

Today we're pleased to premiere a track from the record titled "Dismantle." Here's what vocalist Austin O'Brien had to say about the song:

"Dismantle was written with the idea that it would feature our friend and an amazing poet, Keyoung. He's played a huge part in this band since the beginning and we love his work so it made sense to feature him. The songs content is about examining and understanding myself and my depression and the struggle of fighting back when it shows it's face."

Want to hear it? Good. Listen below. When you're done, we encourage you the pre-order The Things I Am Not.

So many douchey facial expressions.

FRONZ HERE. HEY KIDS WANT A RECORD DEAL? GOOD CAUSE YOU AINT GETTING IT FROM ME. YOU NIGS NEEDS MY FRAGRANCE RAGE IN YOUR LIFE. YOU GUYS LOOK LIKE YOU SMELL LIKE CACTUS COOLER AND JERGENS LOTION. STAYSICK

Ghost key put out a song about depression?? No f*cking way

These comments are so f*cked. Love everything about this song including the message behind it. I've been coming back to this site just to listen to this song for the past 6 hours. I've been listening to these guys for a while and I'm glad to finally see an honest band being able to spread what they stand for to larger audiences. Already preordered the hell out of this album, excited to hear it all come together. Definitely going to check out more from Keyoung, f*cking nailed it.

Also, hope none of these dumb comments stop anyone from enjoying this great music. Don't talk, just listen.

The chuggy parts at the beginning and end are dope but everything in between is so f*cking cookie cutter, how do people find this interesting

So f*cking gangster. I'd f*ck the shit out of Chris.

I saw these dudes with Beartooth a few months ago and it ruined Beartooth's set cuz they blew me away. Preordering this jawn on payday.

jealous ass haters wishing they could have Bayless pedal board tho.

Defeater wants their sound back

You mean to tell me there's ANOTHER black person in a hardcore band besides Franz?? Whoa

If you don't like it, move on!! Why waste your time on pathetic negative comments and hide behind them?? Seriously grow up!! Tammy Wood

this band and this song are both awesome. Keyoung whatttttuppppp. Stoked on this release. Eat a dick haters

My favorite record of theirs so far is "The Difference Between Hell and Home".

This is f*cking t-ts!

yo their split with vanitas is so good