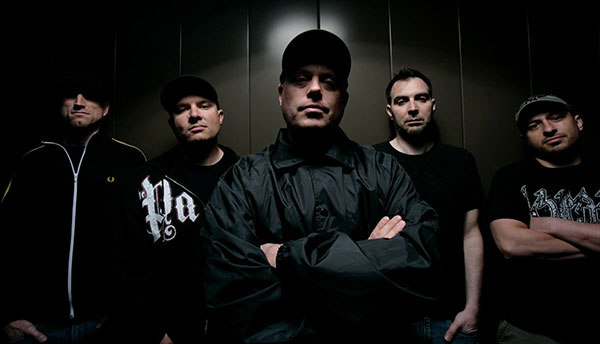 You've never heard of Earth Crisis? Sorry, it's too late for you. Goodbye. Here's your parting gift, an introduction to another awesome band that may be more your style. Still here? Ok, cool.

Earth Crisis has been together since 1989, releasing eight studio albums, three EPs, and several live and compilation albums along the way. Of course, they're not only known for their crushing sonic output, but for their staunch support of animal rights and their promotion of a straight edge and vegan lifestyle.

On May 19th, the pioneering Syracuse, NY act will add another entry to their catalog, a four-song 7" vinyl and CD release titled The Discipline. The EP features two newly recorded songs from the band's seminal debut album Destroy The Machines in addition two unreleased songs from 1990s demos that never saw the light of day.

Today, we're thrilled to premiere the EP's title track "The Discipline." Check it out, and be sure to pre-order the CD, vinyl, etc. from Bullet Tooth or your favorite retailer (iTunes, Amazon, Best Buy).

I love this band.

It's an old song f*cking morons

i hate to be 'that guy,' but the original is still better. plus it sounds like he's straining out a turd singing this now.

The old version is bettr.

You are not edge enough. You rack dissaprin

this sounds like a band i would make fun of was trying to cover earth crisis...

Oh no!!!! I'm concerned that these guys have lost all awareness of how bad they are now. It makes me feel embarrassed for them.

holy shit this re recording is f*cking bad

Freecorded on cardboard. Produced by in a toilet.

the sound is horse shit. why even bother re-recording this song? it was perfect the way it was.

This song is great

This is f*cking great

Amazing keep it up