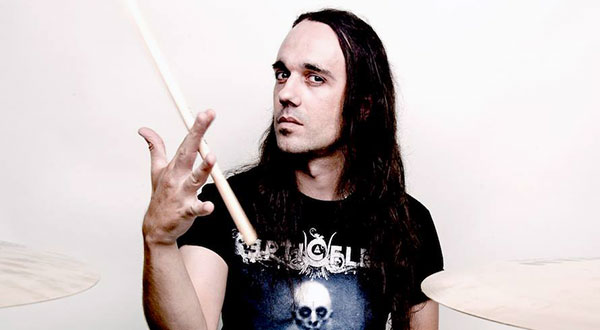 If you're one of those metal fans who pays attention to drumming, you've probably heard of George Kollias. He's been bashing the skins for death metal veterans Nile for the past ten years. Largely self-taught, the highly regarded drummer first started playing at age twelve and has performed on a large handful of non-Nile metal albums, including releases from Nightfall and Týr. When Kollias isn't too busy with Nile, he also travels the globe to put on solo drum clinics and teaches extreme drumming at the Modern Music School in Athens, Greece.

But Kollias can do more than drum. In fact, Kollias has so much to offer that he's about to release his debut solo album. Season of Mist will release the record, titled Invictus, on May 19. A focused death metal assault, the LP features Kollias performing all instruments, in addition to guest spots from members of Nile, Rotting Christ, and Firewind.

Today we're thrilled to premiere the first new track from the album. Stream "Shall Rise/Shall Be Dead" below, and pre-order Invictus here. You can also keep up with Kollias via Facebook.

George Kollias, is such a god damned monster on the drums, i'll always be a huge fan of your music, even though derek roddy was on black seeds of vengeance, you will always be the war god

He is an unbelievably great drummer, but it's a bit boring. Unbelievably technical, but still rather boring.

Ineedmoresalt why do you have to be rude? He stated goods opinion, which he had every right to state. If you don't like a differing opinion, f*ck off.

I think I'll have to buy this when it comes out

His drumming is beyond amazing but the estimate of the song wasn't that great. I can enjoy that much talent on the drums though

this song is old. its been on youtube for ages

I don't care what you gays say. If you got nothing good to say then keep it to your f*cking self. I don't see your guys shit on this page so shut the f*ck up this song is beautiful!!!