NYHC legends Agnostic Front debut a song and video from their new album. 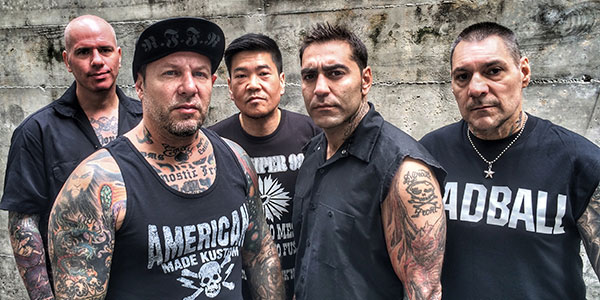 If you have no idea who Agnostic Front is, you don't belong on this website. Period. You might not listen to them, but you know who they are. If you don't, smack yourself, then head to Google, type in "Agnostic Front," and learn something.

Formed in 1980, Agnostic Front has been playing music for longer than a good portion of our readers have been alive. The legendary New York City hardcore punk outfit has put out ten studio albums over the past three decades, and they're just weeks away from releasing LP number eleven.

Titled The American Dream Died and produced by Madball vocalist Freddy Cricien, the new album is scheduled to hit streets on April 7 through Nuclear Blast Records. Frontman Roger Miret recently explained, "We chose this title because we want to open up people's eyes to what's going on in this country. We have a lot to say." Sounds promising.

If you've been anxiously awaiting new music from the album, your wait is now officially over, because today we're thrilled to premiere the first new music released from the outing. Check out the music video for new song "Police Violence" below, and if you haven't already, pre-order The American Dream Died right now. Ya dig?

Confused racists are pretty stoked about this!

Wow that sucked. Sounded like something I would have written in high school. none the less... ACAB

Now that is the agnostic front i grew up on.

Old School AF. Lyrics, kinda comedic, but he's speaking his opinion through lyrics so to each his own. Won't even comment to the disrespectful punks. No reperct.

not old school...just old....please go away and leave me my memories

I wish the police would use violence against them for the p.o.s.

These are grown men? Wow! I think it's time to let go, boys. This is god awful.

This is the biggest Pile of shit I've ever heard. Straight garbage

So much hate against the forefathers of a generation of music that has stood the test of time. We may not all agree on the message but there's little denying the heart behind same. Nothing but mad love and respect to the pioneers. Familia Always!!! Razor Ray GSU

why does stigma even try anymore? hes half brain dead and doesn't even plug his guitar in

Irony as most of the DMS and United Blood shit heads were "security" at Ritz, CB's, A7, and ABC No Rio back in day beating the shit out of anyone that wasn't part of their crew. Roger is just pissed he served time for coke possession. Hands up don't stage dive!

All this negativity for a band that has influenced so many new (shit) bands of today. If you don't like AF well f*ck you. NY underground will still army in while your cutting your wrists to Emo Bullshit. Racist ???? listen and learn the biggest racists are the police. Go and learn real values. You sad negative dumdshit idiots. You see the tattoos and think they are going to break out into green day shite!!!!

Wow! What's up with these comments? AF are legends.

wow. pioneers of shit. give it up, burnouts.

Thats alright..when they hear the rest of the record they will be back sucking the dck hahha

Soit wasonly cool to bash the police when all the"hands up" and "can't breathe" jerkoffs came all over facebook?guess what?The police force is just as corrupt as our government.and thats not to say there are not still great cops out there.true Oath keepers.but what do u expect from agnostic front?This isn't the first antipolice song they have ever written.But since everyone is so PC and sensitive these days.And the nature of today's climate.everyone is up in arms

thats what hardcore is about.speaking your mind no matter how popular that belief is.but now its about coolhair and skinny jeans and bands that try to rock the"hardcore"label when they are not even close to being a hardcore band.get over it.stop being a bunch of bitches and support the band that pretty much started hardcore And gave all u mamalukes a voice,a reason to scream.

if your a police officer and your offended maybe you should obey your oath and take a good look at your brethren who give the police force a bad name.because there's a reason this song was written in the first place

roger rules. its not about hating all cops, just wanting the corrupt to see justice.

That's what I'm talking about, HARDCORE LIVES! Back to the roots, thanks for all you do for your true HC fans. To all you punks who got something to say on a message board go play in traffic you cowards!