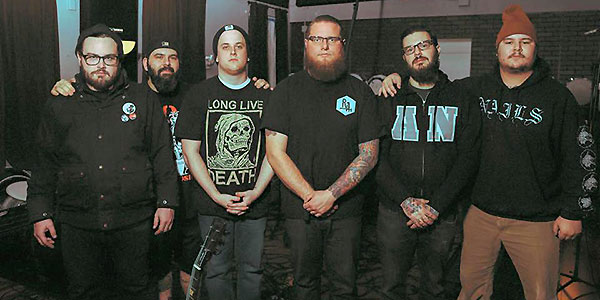 It won't be long before New Jersey hardcore band Suburban Scum releases their debut full-length. Titled Ultimate Annihilation, the effort was recorded by Will Putney (The Acacia Strain, Impending Doom) this past winter and will hit streets in the coming months via Closed Casket Activities.

If you're not yet familiar with these scum, they formed in 2007 and play metallic hardcore, the kind that makes you want to beat people up. And if you've ever witnessed one of their live shows, in the flesh or via YouTube, you've probably noted that people do often walk away with some serious battle scars.

Today we're thrilled to premiere the first new track unveiled from Ultimate Annihilation, a song titled "Death Is Destiny." Check it out below, and keep up with Suburban Scum on Facebook.

So good. Can't wait to hear it live.

this lp is gonna crush fvck nggas into vapor

Seeing them with Expire, Rotting Out, and Bent Life in like two weeks. Hope they play this live.

Here I was think Suburban Scum was just some shitty shirt company. Guess that is what happens when you have more shirt designs then songs.

They're hardcore so they're obviously cool, duh

People will be hospitalized in Oakland during the Scum lords. Can't wait for this pit.

Wigger fight metal at it's finest. This is tight.

I can't think of anything lamer than people posting on here how "hard in da pit" they are gonna go when a band rolls through their town, drop the tough guy douche act we all know you're just going to be standing on the sides. That being said good band good song

liking this, but closed casket is just killing it so far this year. between discourse, I'm hoping a new incendiary lp, and this...very solid. actually will buy this new lp, I like where they've gone lately.

Typical of Subscum. It all sounds the damn same. Hardcore is dead.

Is this a TUI cover?

^^^ No but dude... these lyrics are super deep. death is destiny and shit.

Didn't A Perfect Murder break up?

Haha that "if there's on thing I've learned" part sounds like TUI for sure...good song good band trash talk is better though

That drummer is sick

for those who criticize, you don't feel it. This is some deep sh!t

why the f*ck would you support an extremely run of the mill hardcore band like this when there are others without damning histories? eat what you're fed I guess