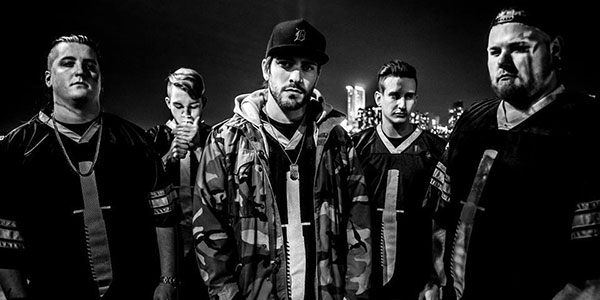 This past December, Century Media Records announced the signing of "tech/nu-metal" outfit Gift Giver. Yes, that says tech/nu-metal; an unabashed description that is probably as close as you're going to get to characterizing the bastard child of a bastard child conceived by The Acacia Strain, Slipknot, Sworn In, and Linkin Park.

Inadequate comparisons aside, later this year Gift Giver will put out their Century Media debut, a record called Shitlife. Today, however, we've got an exclusive premiere of a new song from the effort titled "Cursed." Check out its lyric video below, and be sure to follow the band on Facebook for all of the latest info. Meanwhile, if you like to experience music live, you'll also be able to catch Gift Giver on tour during the next few weeks with Barrier, Villains, Traitors and Adaliah.

Lead singer got slapped like a BITCH at bled fest last year.

people still listen to this shit?

Based on this song alone last ep/album/whatever it was had more potential.

"Bro where can I get a sweet upside down knife jersey like you?"

I use to be a bug chaser until I met these guys backstage at the pride festival. Gift Giver is an understatement!!

slapped like a bitch definition: get all your ugly hardcore friends to outnumber justin 10 to 1, and be such a fgt that you open hand slap a grown man. listening to all that hardcore made you tuff bruh.

Badass. all these bands are TAKING OVER. Gift giver, sworn in, villains, eavesdropper, darke complex. It's happening

Still better than Sworn In.

Gift Giver, Sworn In, Villains, and Darke Complex are all gonna be the next big league bands, this is sick!

ep was ok but this is just boring

this is f*ckin dope ! GiftGiver is the sickest foreal !

Well, this is just terrible...

Is the the singer who got his ass handed to him at bled fest last year? lmfao

Roflcopter it's like Attila meets liferuiner. Not a fan

I don't understand how they got signed..

i heard nick miller went to prom with his sister