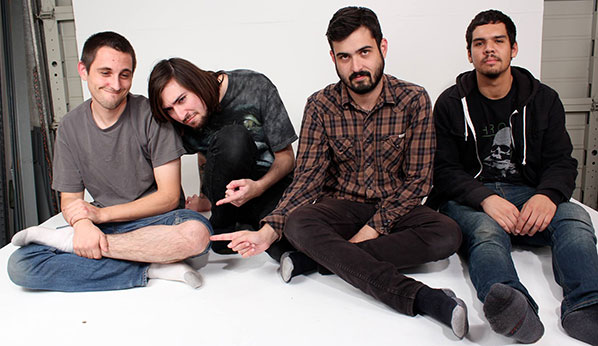 Moorpark, CA band Black Sheep Wall will release their third album on January 27 through Season Of Mist. Titled I'm Going To Kill Myself, the album's music is as unsettling as its moniker.

Black Sheep Wall was originally formed in 2006, and they reside in the doom/sludge/post-rock end of the metal spectrum. It doesn't really matter what you label them; they're heavy. Pounding drums, brutal riffs, and caustic vocals are all found in abundance.

I'm Going To Kill Myself is 64 minutes long, but comprised of only four songs, including a 35-minute-long track called "Metallica." We're thrilled to be streaming the entire effort for you below. Check it out and order the LP online here. Also, don't forget to follow Black Sheep Wall on Facebook.

i gaze into my crystal ball and see visions of the future.... "i am god songs was better" "this doesnt sound like the faceless therefore it sux" "there are no riffs" "the vocalist sounds like a post hardcore gay"

This has "core" in it, this is gay, God songs was better. Seriously this thing is a monster, That 33 min song is cool.

Whatever drug this requires I'm not on.

Is this a joke? "Let's get some riffs and make on each track!" Why i listening this shit and waited of something? "Metallica" is just a mockery! f*ck it! In this genre there some unknown group that much better for example "7.5 Tonnes Of Beard" and "Relic Point" it's absolutely sick guys

I'm a huge bsw fan and this sounds terrible. Who is this singer? Ugg. I was so excited about this too.

Nothing good since I Am God Songs. And even then, it was the sheer desperation of that vocalist that made most of those songs.

People with one black friend are stoked.

This sounds great! Who's singing on this album?

Love the vocals, he sounds like he is at the end of his rope. Sorta reminds me of Taken. STOSS.

Holy shit that Metallica shit is retarded it's like tactical nuke times 6x with vocals. As an add on to an actual album I'd say w/e f*ck it but without having this there's only 3 songs. It's 30 min of a single f*cking note for 85% of the time ??. The other songs are pretty chill though.

What a title. Music this f*cking bad I would commit suicide as well. Well strategized.

Don't like it? Don't listen. f*ck the haters. BSW destroys.

this is better than i expected. the admiral angry vocals kinda ruin it but Metallica is banging hard for me right now