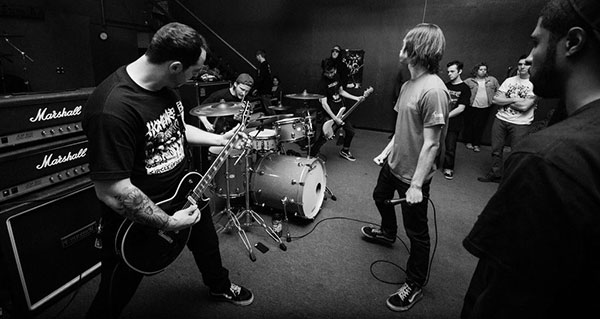 Did you know that South Carolina hardcore outfit Discourse are about to release their debut full-length, Sanity Decays?

Formed in 2011, the group signed with Closed Casket Activities in November, and their new LP is slated for a January 27 release on vinyl and digital formats. For the uninitiated, the band cites late 90s/early 2000s bands like Turmoil, Indecision, and Buried Alive as influences. If that works for you, and it should, read on because today we're premiering the first new track from the album.

Stream "Cure" below, and then pre-order Sanity Decays. Additionally, be sure to catch Discourse on the road next month with Blistered. You can find those dates here.

Song is cool but heard singer is a chode.

Hey anonymous, why don't you take the dick out of your mouth before you speak next time lol

Issy is an jerk

I am an jerk

Some hurt butts are posting today

really cant hate on the turmoil worshiping going on here

These comments are trash. You people are all scrubs. Discourse rulez!!! SMD if you don't agree

This band is soooo HOT

I am definitely gay!!

heard the singer doesn't like hardcore he's a f*ck boy.

These comments get more and more ridiculous. Why don't you try starting a band? You could only be so lucky to have one of your songs advertised on a site like this..Hate all you want, but it's all publicity kiddos.

the bassit posted a few of these comments

This band is so sick, extremely talented musicians and solid dudes.

This is Really good, cant wait to hear the entire record.