Kickstarter: fund it or f*ck it?

Kickstarter is becoming a popular way for bands to fund their latest endeavors. Is it worth trying? Susan Ma attempts to find out.

By Susan Ma
If you don't know about Kickstarter, you could be missing out on some great opportunities to have financial and moral support for your cause. For the uninitiated, Kickstarter is a web-based pledge system that primarily facilitates funding for creative projects (note: if a project is successfully funded, Kickstarter extracts a 5% fee).

Co-founder Yancey Strickler explains the objective of Kickstarter as such: "This is more about, 'Here's who I am, here's why you should care, here's what's special about me, and here's why you're going to benefit by being involved.'"

When you browse through the site, you'll encounter reward options that seem pointless and, initially, worthless. But imagine these rewards from your favorite band. Meshuggah? Karnivool? Emmure? Asking Alexandria? DONE! 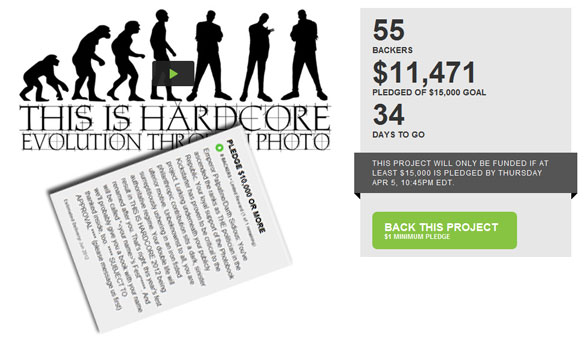 Matt Williams of He Is Legend states his opinion: "I feel like a thing like Kickstarter could really help a band that is in a similar position to ours to put out a new record. I definitely think we might look into something like that to help us get a new album done, being that we are not in an appropriate financial situation to fund a record for ourselves. Regardless, it kind of gives fans the chance to really feel like a part of something that an artist they love is trying to create."

Andy Low from Robotic Empire describes his Kickstarter experience for TILTS: "We tested the Kickstarter waters with a fairly straighforward album release for TILTS… Without this 'less risk' sort of set up, some of the things we have on deck may have never made it past the drawing board. It's also interesting as it sort of allows the general public to deem whether something is worthy of existing or not. I also feel like if folks get too greedy with their project's funding goals, the population can see that right up front and respond accordingly."

By offering multiple pledge options, the account holder can offer a wide range of rewards. Most will offer the product itself, or something personalized from the person/group. Here's an example of a successful small project:

Soul Embraced is a Christian death metal band from Little Rock, AR who recently parted ways with Solid State Records. From their $3,000 pledge goal to record a full-length album, they've raised $3,710. A lot of us don't have $3,000 sitting around to record an album. (And if you do, we need to be friends.) This band has a realistic pledge goal and realistic rewards, all doable for the average musician. Hate all you want, but they just raised a semester's worth of tuition at your community college to record their own music! And trust me, they're not wasting time accidentally taking screenshots when they're trying to use the shortcut to consolidate regions on Pro Tools.

Sparks The Rescue is an indie rock band who recently split with Fearless Records. After starting a Kickstarter campaign to fund their next album, the band made a pledge goal of $6,000. In a matter of weeks, they raised over $12,000, double their original goal. I had no idea who this band was prior to finding their article on Alternative Music Hub and I'm not even a fan of the music. Bottom line? They have loyal supporters who just helped them raise more money for an album than a label would fund an average-status band. As Bobbi Flekman from Spinal Tap would say, "Money talks and bullshit walks."

The downside to such an open program is the obvious advantage taken by those who fund non-creative projects, such as… The Donut Tower? Don't even get me started on this sorry excuse for an idea, but for those who pledged $10; You'd get an email with their "awesome logo" and a shout-out on their Facebook page. Not like we don't receive enough stupid e-mails and you know, Internet fame is just so cool…. It's refreshing to know that they did NOT reach their goal of $8,500. Yup, you read that right. $8,500 for metal skewers glued on a cardboard foundation to stack donuts. (Hey who knows, maybe the guys from Epic Meal Time will use this idea.) 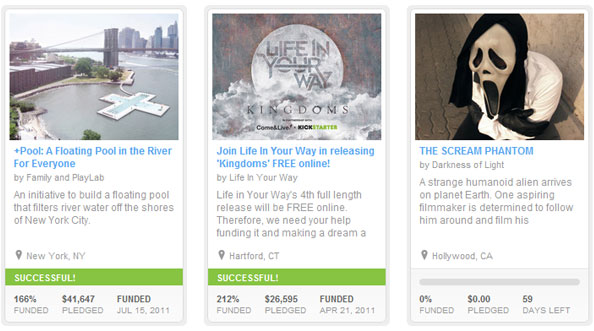 Matthew Fox from Shai Hulud comments on Kickstarter's potential disadvantages: "Although this program offers so much opportunity to fund great ideas, it can also fund ridiculous ones. Someone set up a campaign to have their toenails clipped! (insert The Poker Face meme right here). When taken advantage of, it becomes dangerous and unfair for those who have a genuine pledge…"

Oceano's Devin Shidaker takes it a step further and states, "There's obvious advantages to Kickstarter, but it's made bands get lazy. Where's the hard work anymore? I remember when people in the band would work their asses off to save up money for a new van and trailer. Now they just ask people to donate without any real work."

When these platforms are exploited, it becomes dangerous ground where fans forsake loyalty and unprincipled "artists" essentially partake in thievery. I mean seriously, would you pay someone four figures to clip their toenails? Quality control and merit continue to be hotly debated topics relative to Kickstarter (be sure to read Could Kickstarter Be Evil?).

Another point to note is that if you don't reach your Kickstarter goal, you don't receive ANY funds from your backers. No money changes hands whatsoever. This is a different concept from IndieGoGo, a competitor platform that allows you to keep any funds you receive (minus their fee).

Brian Thompson, founder of The DIY Daily has the following to say: "Crowdfunding can achieve all of these goals…. But there is a caveat. Most people seem to forget the first half of the word 'crowdfunding' - crowd. In order to have a successful fundraising campaign you need to have the most essential element in place, a fan base to market to. Because if you don't have anyone to market to, your campaign will fall on deaf ears."

I'll end this with a formula from Thompson.

I have mixed feelings for this kickstarter thing. I can see where it really helps a lot of individuals/bands fund their passion and creativity, but on the other hand, like mentioned, it really takes a lot of the hardwork one usually puts into that passion. Its not just about recording an album etc, its about the hard work and determination it takes to get to that point of being able to do that.

not totally sold on it, either. it can be very positive, as in the case with the Tilts release, the rewards totally justify putting up the money. I will not donate to a van fund, it seems silly. ghoul got their van funded in like 3 days, so more props to them, namean?!

Sweet Idea... But what happens when people make pledges and the bands dont follow through on their end? Or the album never comes into fruition? Shit happens and everyone has an excuse for everything. What happens when the band collects $5K from fans expecting a new album, then the band breakes up prior to this happening? only time will tell. I would dontate to a band i dug... but prob not much money...

So can one start a Kickstarter account to help pay off their mortgage? Their car payments? Are there any rules at all? What are the real drawbacks? Do they show up as taxable income? Is this thing basically just like the empty can a beggar uses to mooch money?

"Although this program offers so much opportunity to fund great ideas, it can also fund ridiculous ones. Someone set up a campaign to have their toenails clipped!" So because someone might get taken advantage of, we shouldn't even try this? People have to learn to do their homework and fund projects they believe in. It's akin to learning about which charities actually give their money donated to who they say they will, versus paying high overhead and shitty documentaries (Invisible Children).

what if johnny craig got ahold of this website....all hell would break loose. More feeding of addictions.

Social media is for f*cking gays

what does this have to do with converge?

I participated in a Kickstarter project for a musician and wouldn't ever again. Long story short, the artist and "management" company lied to a large percentage of the backers claiming that everything was mailed when it really wasn't. About a month later and after having to stay on them and being lied to in emails, I finally got a CD in the mail, which wasn't even packed right.