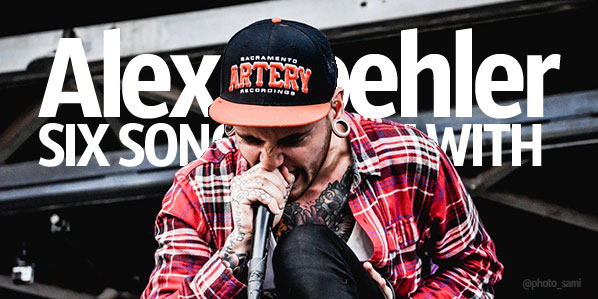 Since forming in 2007, Utah deathcore band Chelsea Grin has methodically risen the ranks from small tour opener to frequent headliner with their last album cracking the U.S. Top 30 albums. As such, it seemed like a good idea to ask Chelsea Grin frontman and founding member Alex Koehler to choose Six Songs To Die With.


Alex Koehler: In my opinion, one of the catchiest metal songs ever.

"Off To The Races"


Alex Koehler: I like a smooth voice with a catchy hip hop beat behind it.


Alex Koehler: I love how passionate and real it is.


Alex Koehler: This was my favorite band for years growing up. I'd pick the whole album if I could.


Alex Koehler: Childhood guilty pleasure. Plus, I like warming my vocals up to it.

Wow. These are typically pretty embarrassing, but this is next level. Unreal.

this guy is a f*cking moron.

THis is the worst/ g a y e s t band to EVER come out of Utah. This boyband trash needs slow death.

HOLY-f*ckING-SHIT. Awful taste dude, this shitty pssy sings in a band? must be pure diarrhea.

What a vicious cycle of douche bags taking in garbage then producing garbage themselves. Linkin puke in my mouth.

This dude needs to listen to something other than "whatever's on the radio, played at a reasonable volume."

Surprised emmure isn't on this

everybody chill the f*ck out, it's call a "difference of opinion".

I don't think half of you guys understand that it's possible to like music outside of metal. His list was pretty interesting, and so what if he found some songs on the radio, just because its on the radio doesn't mean its bad music.

nothing better than watching a metal singer like him have such a diverse taste! <3 the songs are great!

Everybody commenting all this hate is wasting their time. Alex doesn't give a solidarity f*ck what anyone thinks of him or his taste in music. So please go troll elsewhere people give a sh*t :)

While this is Alex's personal choices, it lacks emphasis on what it really means to be the songs to die with. If anyone here saw previously Misha Mansoor of Periphery picked several songs showed a well thought out emphasis on the same question.

I'm not sure this guy even likes music

Why all you guys hatin? This is his opinion you throw up 6 songs and listen to all the feed back I dare ya

I like how all of you dumbf*cks don't know who Chelsea Grin is. They have Jason f*cking Richardson (formerly of Born of Osiris) who is the best f*cking guitarist ever, and they are a Deathcore band. Are you all just seriously that f*cking stupid? I bet most of you beat your dicks off to Falling in Reverse and pssy Post-Hardcore. gays. By the way, Alex would stomp any of your asses in person. He's gigantic, so would Frankie Palmeri of Emmure. Incompetent f*cktards.

Everyone defending this enjoys Slipknot and Staind. I just became gay as I was typing out Staind. Now I'm a woman.

Sick list man. f*ck the rest of these kids

Sooooo much negative judgement. None of you are any better than the people you put down. I'm embarrassed by all of your comments. Alex Koehler, good choices. We don't know you, or your story. \m/

All these haters, lol. Its funny how much these f*cktards have to say.

He's not that tough you gay gay gay. He got his whole band kicked off one of the Summer Slaughter tours for talking shit when he was drunk to some random dude and the dude broke his jaw like it was nothing. The singer couldn't sing anymore so they were told to leave the tour. Sorry to shatter your dreams gayatron.

Seriously though, those are some bad songs.

anonymous posted 2 days ago I don't think half of you guys understand that it's possible to like music outside of metal. His list was pretty interesting, and so what if he found some songs on the radio, just because its on the radio doesn't mean its bad music. uh lol

You people hating are f*cking pathetic. Criticizing him for who he is and taking shots at his band because of some songs he likes/grew up with? Grow the f*ck up. Like their music or not, Alex is a role model to kids growing up in the metal scene, unlike 95% of them. If you know who he is and what he's about maybe you'd think again before you start acting like an ass. Rock on Grin.

Its called being open minded. Chelsea Grin is the shit!Their music is amazing and they put on a great show live. An to the gay that's talking shit on slipknot go f*ck yourself poser. Slipknot is the best metal band ever. Let's see you go through all the shit they went through and make a 9 member band that successful. You probably beat off to fall out boy and my chemical romance you f*cktard!

It's sad most of you comment talking shit under anonymous, he's still more successful and above you then you will ever be, why because he doesn't care about people like you, only reason I'm anonymous is I don't have time to sign in, because I'm putting real use to time instead hiding behind a screen talking shit about an amazing artist