If you haven't heard of Earth Crisis, you don't know anything about hardcore. Period. Maybe you don't like them, which is fine, but you have to be aware of them. Since 1989 the Syracuse, NY band has been consistently hammering away, promoting their straight edge and vegan beliefs with punishing hardcore and metal. 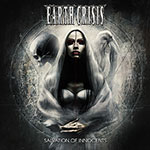 On March 4th, Candlelight Records will release the newest Earth Crisis album, Salvation of Innocents. Guitarist Scott Crouse recently had this to say about the album and the band's partnership with the Liberator comic:

"The process for this album was new for us. We did most of it ourselves. The absence of pressure having to get things done by a certain time each day really gave us the freedom to try new ideas and critically listen to the songs. From the music, to the lyrical concept, to the comic book that brings the lyrics to life, we think we've created something pretty unique."

So without further ado, we're pleased to present "De-Desensitize," the first track on Salvation of Innocents. Listen early and often. When you're done, give the band some feedback on Facebook.

It may have been a long time coming but it's good to see ExC back with another crushing tune. If the album is anywhere near as good as this then it's going to a belter!

Makes me wanna eat a big meatfeast burger and down 4 bottles of weissbeir. Straightedge for...... a while.

This sounds real good. Will listen.

Sounds good, will definitely be listening

This band is my all time favorite band sing high school, since 1991 to present lyrically and musicaly genius! I turned vegetarian and edge because of this guys 14yrs from now!:)

King Of Clubz is still stoked!

Service unavailable. In Japan you shall not listen to Earth Crisis's new song.

Wouldn't it make more sense to call it re-sensitize. Or would that sound to sensitive?