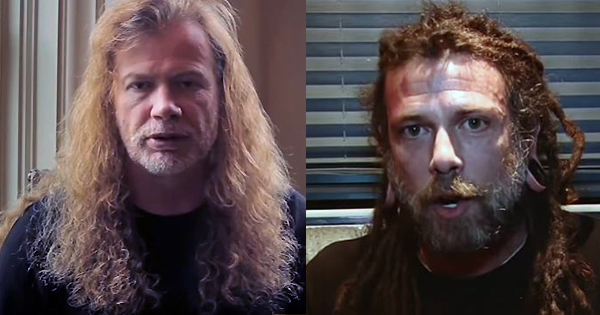 I'll try to waste as little of your time as possible (scroll to the bottom for the three-second version). Here's what happened...

Metal Blade Records head honcho Brian Slagel recently released a book titled For the Sake of Heaviness: The History of Metal Blade Records. In said book, Slagel recounted his attempt to sign Megadeth in 1984. Essentially, Slagel says he was outbid Combat Records): "In the end, it came down to just a thousand dollars. We had offered them seven thousand dollars, but Combat offered eight, so they went with Combat."

Megadeth mastermind Dave Mustaine got wind of the claim and took to Twitter to call out Slagel: "If the fallacy of offering us a deal for $7,000 is any indication of the rest of this book, I hope it's marked fiction. I'd never sign with you."

It didn't take long before Slagel apologized: "I'm so sorry if I got this wrong or offended you. I do remember talking to your camp at the time. If my memory is wrong again not intended."

Mustaine accepted the apology: "I totally forgive you, but you didn't talk to us. Please take that out of your book at your next printing and good luck with your project."

However, in the interim, Chris Barnes, frontman of long-time Metal Blade act Six Feet Under, wanted to weigh in:

You sir are a FUCKING ASSHOLE.

Here's the rest of the ensuing "conversation":

Takes one to know one. https://t.co/i8qrXTlHFt

Yeah I guess so.. But you're the King of the assholes, enjoy your throne. https://t.co/S1c3w6A4oL

Some unknown Seattle musician from metal blade that made a fool out of himself. Big talk from a cell phone. https://t.co/qJj91rqz4a

Chris what would you do if someone wrote something false about your band? Not that anyone would. Would you speak up or would you do nothing? https://t.co/Tgo2VH1OGK

They do all the time. And sometimes I do sometimes I don't. Anyway have a great day nice talking to you ?? https://t.co/QvEBJ1w7o7

No one cares Chris. You are a complete waste of time for all my followers and your one. Have a life. https://t.co/HzReQdp4Kv

Too funny. I would defend my label too, but not like that. Now he just looks ignorant after Brian apologized. I hear crow taste like chicken https://t.co/IIMx1g6Uks

Dave Mustaine vs Chris Barnes summarized: two assholes call each other an "asshole."

who gives a shit about any of this?

Yeah 2 "jerks" that put money in your pockets, and bring readers to your pathetic site.

Lambgoat is run by a bunch of whiny bitches....complaining how these two are having it out like a 16 year old girl whispering secrets to her classmates...

I just find it funny that everyone posts anonymous on this site Craig Motyka from Riverview FL .... since I've gone legit I will say this megadeth is still good ... Chris Barnes well we all know he got shit canned from corpse and the new six feet under sounds like he is underwater on most of it... just water down death metal if you ask me again my name is Craig Motyka you may find me on fb ...and I approve this comment

Six Feet Under is garbage

They should try mixing it up with President Trump on Twitter.

these two tampons could at least afford a can of Barbasol and some bic razors, but it still would not shave the ugliness that is their lives.

Two egotiscal idiots argue over another idiot who egotistically takes credit for every band under the sun's fluff of a book. <------ there's your summary.

I wasted a good shit reading this....

Arguing like a couple of teenaged girls seems commonplace with aging rockers nowadays. It's tough to keep one's mouth shut, but it does no good for either party, ever. Barnes already exposed himself as an absolute jerk during the Travis Ryan incident.

BOTH of these Sage Bots need to shave their mugs AND wash their hair!!!!!

How much does it REALLY cost to book your favorite band for a show?
watch what happens when trash cans enter a mosh pit
true stories? Or urban legends?
Motorhead frontman Lemmy worth less than $650,000 at the time of his death
King Conquer ex-member says the band left him on the side of a Texas road