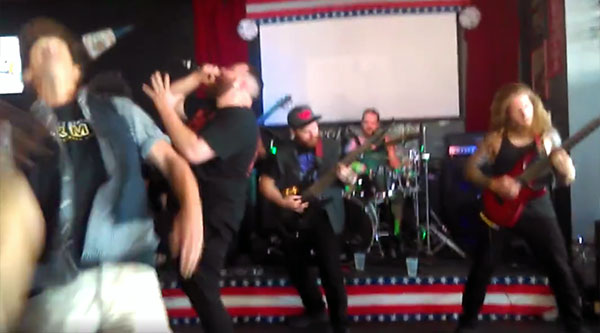 Yesterday, Mississippi band Vaen uploaded a video of a 58 year-old man getting knocked out via a spin-kick during the band's weekend show in Biloxi, MS. In addition to sharing the footage, Vaen also had this to say:


"We do not condone the intentional targeting of human beings, but we also do not encourage senior citizens to enter our mosh pits. This is the second time this has happened during our performances with two separate drunken elderly men. Enter the pit at your own discretion. We are not responsible for your choices to enter, or the actions occurring during said choice.

"He was completely okay after this happened, he was bleeding pretty badly but recovered in the restroom, and came right back out and was trying to mess with kids dancing in the pit again right after. He was warned to stay out of the moshing area numerous times by bands, crowd members, and staff at the venue."

band is shit, but deathcore dad's vest is on point.

he didnt get knocked out, he fainted because that band is fcking awful

Probably could've stopped playing as there was an unconscious dude laying at his feet though.

25 ta life should open for these guys

The only thing that is wrong with the old guy is the fact he likes going to see shit bands.

I would love for one of these so called hardcore ass f**k losers to raise a hand or dropkick at me ..i'd blow their f**king brains out ...true story ..try me and find out

fck everything about this, but mostly fck the band's "statement." While this guy is clearly older than your typical metalcore audience member, he is certainly not "elderly," and he didn't get hurt in "the pit" by a dancer. He's pretty clearly sucker-punched. Probably targeted for being an "old guy in the pit." I once wrote a song about this very topic. Here's how it goes: https://youtu.be/NCvrBy7XF ow

Is this the new Emmure lineup??

The guy was far from elderly and did look like he swung at that one kid. He got kicked in the face because of his actions. He shouldn't have been sucker-kicked though, that shit happens way too often at shows. F that band for continuing to play though.

This is a bummer on a bunch of levels. The band sucks. The kid that kicked him sucks. The fact that they didn't stop playing sucks. fck these guys. Hope Todd Jones doesn't ever let them be one of us.

lol @ this band having 3 guitar players. Lol harder at one of them looking like SLK.

That was a lol

Like amusement parks, they need to put an age limit on various genres and their pits. Pops would have been fine in a sludge metal pit.

that guy shouldnt have been doing what he was doing. he didnt understand what was going on and was probably drunk. he was asking for trouble and got it

Reminds me of how Bryan Grantz moshes

why would they stop playing? dumbasses get knocked out at shows all the time

Y'ALL SOME PUNK ASS KEYBOARD WARRIORS IF I EVER MEET THAT TACO VENDER OUTSIDE OF ANOTHER VENUE, I'M A FIXIN TO PUT HIS BODY IN AN ANACONDA VICE LOCK AND MAKE HIM BELLOW ATTILLA JAMS F0'DAZE YA' HERD MEH? STAY SICK!!! YA KEYBOARD CHICKS WITH DICKS...I'M ABOUT THAT LIFE.

How much does it REALLY cost to book your favorite band for a show?
true stories? Or urban legends?
King Conquer ex-member says the band left him on the side of a Texas road
watch what happens when trash cans enter a mosh pit
Motorhead frontman Lemmy worth less than $650,000 at the time of his death