Happy Father's Day from As I Lay Dying

There have only been three updates to the official As I Lay Dying Facebook page during the last two years (if you're just waking up from a coma, founder Tim Lambesis has been in jail since early 2014). Strangely, two of them have been Father's Day wishes. I'm not sure who administers the page, or why Father's is of the utmost importance, as opposed to other days, but whatever. Either way, the comments are predictably all over the place. Here's a sample: 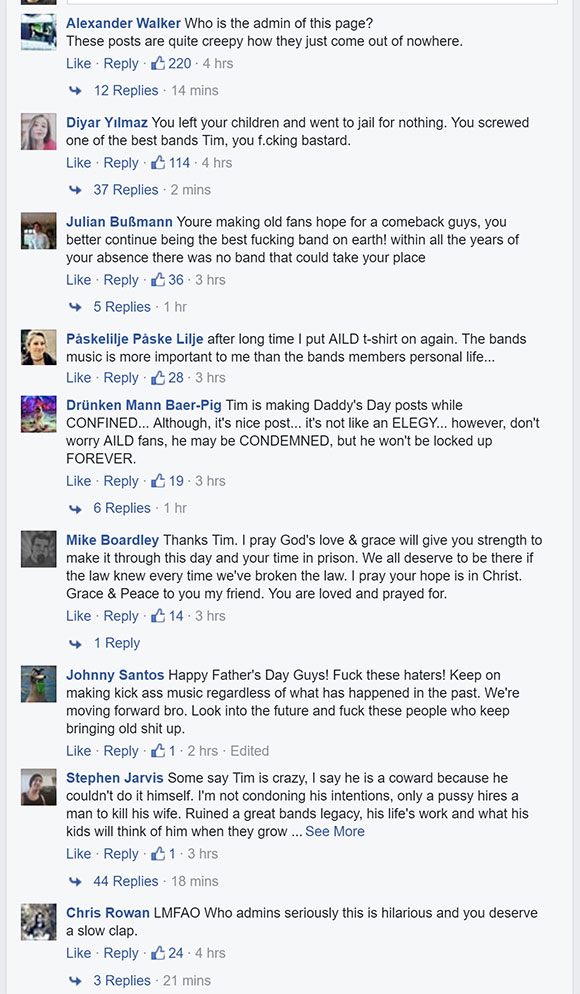 Stephen Jarvis is now on a few lists.

Yeah, man, fck the haters! You only tried to hire somebody to kill your wife, what the fck do they know? The past is the past, man, AILD 4 lyfe

admin is johnny craig i promise

admin is johnny craig i promise

who's ya daddy n what does he do? neaaaghhhhhhhh

Jamey Jasta bit off his own thumb bc he's not a pssy. -Stephen Jarvis

I have read this awesome Blog I am very happy to Visit here thanks for share this. https://www.webtechcoupons .com/offers/vmware/

Mudbox is a software for 3D sculpting and painting which is developed by Autodesk. aadegdedfccfbffg

How much does it REALLY cost to book your favorite band for a show?
Varg Vikernes (Burzum): "I no longer play metal music"
true stories? Or urban legends?
Terror frontman Scott Vogel calls The Ghost Inside 'bullshit band'
Jared Dines vs We Are Triumphant and 'Things sketchy records labels say'