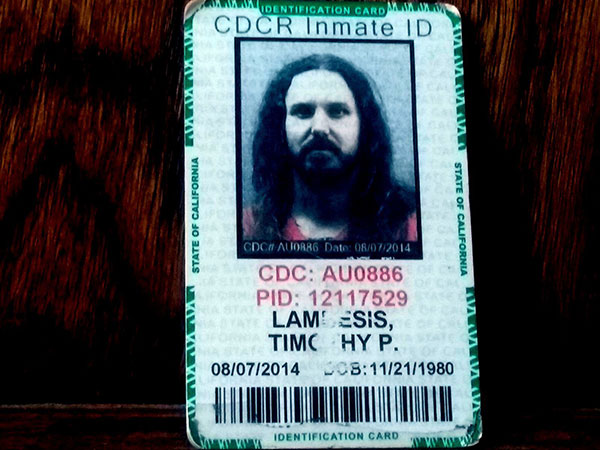 Tim Lambesis, founder and frontman of defunct metalcore act As I Lay Dying, has been imprisoned at the California Rehabilitation Center (CRC) in Norco, California since July 2014. If this is news to you, welcome back to Earth, and start catching up here.

Anyway, curiously, a "Tim Lambesis Inmate ID" is now for sale via eBay with a starting bid of $500. The seller claims to have been incarcerated with Lambesis:


"Tim Lambesis is an American musician and producer, best known as the founding member and lead vocalist of American metal-core band As I Lay Dying. He was sentenced in May 2014 to six years for trying to hire a hit-man to murder his wife. Current owner (who wishes to remain anonymous) of this article was incarcerated with Tim and befriended him. When asked by Tim what he could do for his close friend (and self-claimed biggest fan!), this identification card was given to him by request. There is only one like it... outside of prison, that is."

Well, now you know.
Tags: As I Lay DyingTim Lambesis

Wovenwar is also hot garbage too. That band stinks

Hey I'm your biggest fan. Give me something to sell. fck Tim, but fck this guy harder.

bullshiiiiit...some prison employee printed him off a new one and kept this. so fcking what.

Wow someone's gonna get fired for this

Rehab center????? For hire to kill? He should be in San Quentin.