Disturbed frontman calls out woman for texting during show 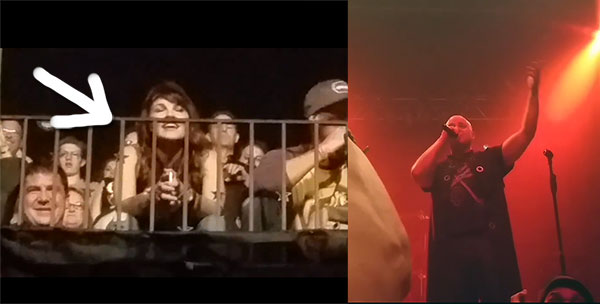 This week Disturbed frontman David Draiman interrupted a show to berate a woman for texting during the band's set. The incident took place on March 23 in Dallas, TX. You can check out the video below.

I get that it can be frustrating when you're performing and people ignore you. But you're a big boy (I think?). You're also supposed to a professional. Just do your job. She paid for a ticket, right? If she wants to waste her money, so be it. And what if she was having a serious conversation about a medical emergency or something. Let's face it, she was probably screwing around on Snapchat, but whatever, David Draiman, get over it. Do you really need to call her out in front of hundreds of people? Take your righteous indignation and file it away with that bullshit you have on your chin. Oh, wah ah ah ah!

LOOK IN MY FACE MY SOUL, TAKE A SELFIE, GUY....WHOOOOAAAHHHH

Hes acting like a fcking child thats been starved from attention his entire life....smh

Lets face it, She wasted her money buying a ticket to see disturbed. I didn't even know they were still a thing

Yeah you fcking did know they were still a thing, quit lying.

so why is lambgoat going out of its way to attack popular metal bands?

what a whiny little bitch. Shit is seriously sad to watch

Maybe if your band didn't suck ass, she wouldn't have to distract herself.

Worst band in the world.

This band sucks all the dcks in the universe.

Well come on people this band is going from state to state on tour...packing moving and packing again. To see this shit? And then there are the people that have saved up to go and see them live and yet she is right in front of them texting? Really? If it was an emergency get the fck up and leave. fck!

I was there and he DID NOT interrupt the show to call her out, this was after the show was done and he came back out for the oncor.. and I agree with him, she was being rude, we all wanted to see the show

She paid to attend a Disturbed concert, this is the real tragedy here. She was probably just having an emergency conversation with her therapist "I did it again. I relapsed and am watching a shitty Nu Metal band again. Im So ashamed" "Damn it Jackie! you've worked so hard"

who gives a shit if shes texting, quit harassing her and play the venue your lucky to even be booked at.

They should tour with Danzig next and complain the entire set...

Oncor? You belong at a disturbed show.

"oncor" Yep homeboy was definitely there.

Let's not mention the fact that her texting is likely distracting everyone around her. Sounds like Lambgoat writers text at the movies too.

DUH WURST THENG SEH DED WAZ BUHY A TEKKET TO DESTURBEDZ. AM I FUNNY YET GUYS!?? AM I PART OF THE COOL CROWD NOW?! LOOK AT ME! GATHER AROUND ME! SHOWER ME WITH YOUR PRAISE!!!! PLEASE LIKE ME, IM TELLING THE FUNNY HERE!!

This band is shot

So edgy throwing in the word fck in places where the word fck makes no sense. Personal favorite is "ladies and fcking gentlemen".

DISTURBED was perturbed. And not sure I agree with this article when it suggests that not watching them play is wasting your money. I think more people should do this at their shows now!

how did this band ever get famous?

What a bunch of sheep. They all go "bah bah!" when the leader goes "bah!", but you damn well know that 99.9% of those fckers in this room have done the same shit at some point in their life. That broad was probably the smartest one there...she knew what she was hearing was dog shit, and she was bored to tears. I bet the singer will come out with some bullshit apology shortly now. Even though he doesn't care.

This band still playing shows in 2016 is seriously just about the single most disrespectful thing I've ever known.

the fact that i read all these comments DISTURBED-S me.

This just improved my perspective on this band. fck CELLPHONES

the real absurdity here is the number of visible people that paid for a ticket to see disturbed.

I love the people that hate on Disturbed lmao. That band is, and will always be bigger and more successful than your shitty hardcore band from your hometown that you hxc dance to at their 20 person crowd basement shows lol. Show some respect to bands that are actually doing it successfully out there. Too many disrespectful angst-y Hot Topic employees on these comment sections smh Lambgoat community.

One time I was at a show and texted through a Twelve Gauge Valentine set. Wasn't sorry, that band sucked.

How do so many kids that like Disturbed even know what Lambgoat is? Are you guys handing out flyers at child abuse support groups and disc golf outfitters?

Wow someone texted, get with the fcking times you old gays. You've been saying cellphones and texting were passing fads since a decade ago.

I met this jerk as a kid, told him he was my favorite singer and Disturbed was my favorite band. His response? "I know," then scribbled his signature and turned his head. He's a self righteous pompous douchebag.

The thing is that (after all) I saw the same thing at ANY concert! I saw at Maiden's concert, people texting all the time... I saw that often at any concert... and Frankly said, I was thinking the same damn fcking thing than him, there! It's the same thing anywhere at any place... for any occasion... Put your damn cell away and live your LIFE Tabarnack

How much does it REALLY cost to book your favorite band for a show?
true stories? Or urban legends?
Christian Bale learned double-bass drums by listening to Pantera, Mastodon
Video: soul dancing to Meshuggah
Emmure is involved in a new beef, this time with Upon A Burning Body