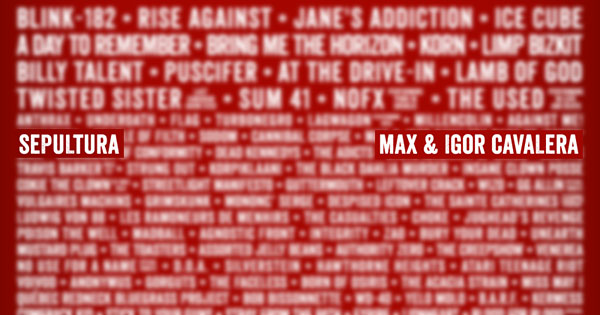 In case you missed it, earlier today the full lineup was announced for Canadian festival Amnesia Rockfest, slated to take place in late June. Interestingly, not only is Sepultura scheduled to perform, but so are ex-members Max and Igor Cavalera.

The Cavalera brothers, who composed the "classic" Sepultura along with current Sepultura members Andreas Kisser and Paulo Jr., will reportedly perform Sepultura's 1996 Roots album in its entirety. So, it's a near certainty that both bands will perform the track "Roots Bloody Roots." This begs the question, who will play it to the bigger crowd? The answer seems pretty obvious. Basically, a band not called Sepultura will have more people watching them play Sepultura songs than the actual band Sepultura. Lol.

Let's be honest here: Sepultura hasn't fared too well from a commercial standpoint since the departure of Max Cavalera. Album sales and popularity took a steep dive between Roots (1996) and Against (1998), and Sepultura hasn't had an album debut in the Billboard Top 200 since 2001's Nation. Moreover, their last album (released 2013) only sold 1,800 copies in its first week in the United States. That's not good, even in today's struggling music retail environment (that same week, Skeletonwitch sold roughly 5,500 copies of their record).

Oh well, at least they're still trying. Then again, that won't make it any less awkward when they're upstaged by Max and Igor at Amnesia Rockfest.
Tags: Igor CavaleraMax CavaleraAndreas KisserAmnesia RockfestSepultura

But in the end, I wanna see some respect.

is this asposed to be awkward lol

a rare night out
Doc Coyle gets soaked at Lamb Of God show
Varg Vikernes (Burzum): "I no longer play metal music"
Cynic, ex-Death members openly discuss their sexuality for the first time
Nine string guitars may or may not be useful