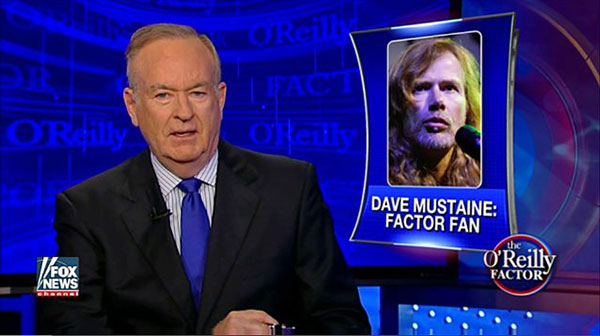 Bill O'Reilly, host of what's currently the most-watched cable news program, The O'Reilly Factor, gave a surprising endorsement of the new Megadeth album on the air last night (February 3). You can check out the video below. Here's what Mr. O'Reilly had to say:


"A hard rock guy named Dave Mustaine who used to be in the group Metallica and is now in the group Megadeth is apparently a big 'Factor' fan. Mr. Mustaine Tweeted out pictures of all the 'Killing' books he has read, and that gets my attention. Very politely, Mr. Mustaine then asked me to listen to Megadeth's new album, 'Dystopia'.

"Now, right before I go to sleep, I usually listen to Megadeth. It relaxes me, it brings me down.I have to say I'm an R&B guy, not heavy metal or hard rock. However, I keep an open mind on these things, and some members of my staff are big Megadeth fans. They've got piercings everywhere. So we wish Dave Mustaine much success with his new album and admire his promotional ability."

i heard he likes full of hell

so ridiculous its funny.

At least he stopped talking about how black people are the problem with society.

he "relaxes to this album before [he] goes to sleep"? I call bullshit.

Is it me or the picture looks 3Dish? Like all the elements are popping out. Ok, it's me.

'who used to be in the group metallica?' really? we're still talking about this more than 30 years later? he was in the group for what, 40 seconds?

How much does it REALLY cost to book your favorite band for a show?
true stories? Or urban legends?
Motorhead frontman Lemmy worth less than $650,000 at the time of his death
The Dillinger Escape Plan issue 'the gayest shirt of all time by any band'
Terror frontman Scott Vogel calls The Ghost Inside 'bullshit band'