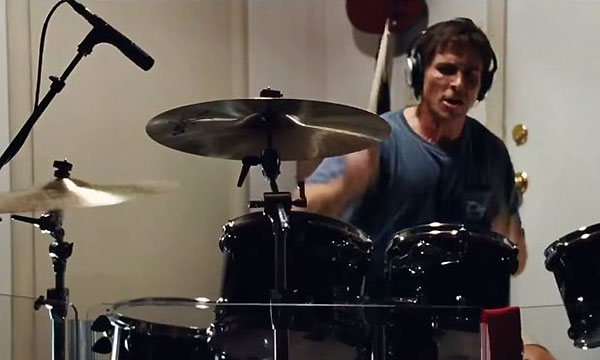 In a new interview with Screen Rant, actor Christian Bale discussed learning to play double-bass drums for a brief scene in the new film, The Big Short, by listening to Pantera and Mastodon. In the movie, Bale plays hedge fund manager Michael Burry, who likes to unwind by playing drums. When asked if it was true that he learned to play drums in two weeks, Bale had this to say:


"Yes, yes, yes. It was a wonderful crash course. Double-kick drum, Pantera 'By Demons Be Driven' — a fantastic song to begin with. This is how Mike Burry unwound. This is actually how he calmed down. He would listen to it all day long in his headphones — and not just that; Mastodon as well. But his brain is on fire so much that death metal calms him. He's a very, very different indivudal to most of us."

Everyone knows Christian Bale is a gigantic jerk. This is still kind of neat, though.

Just cool it with the anti-Semitic remarks

Try getting a reservation at dorsia now you fcking stupid bastard

It even has a watermark

Oh Africa, Brave Africa. It was a laugh riot

The fck is this guy saying? Learn English or GTFO! 2nd amendment!

I suppose you're one of them there 'Muricans that think since Jesus spoke English, that it should be good enough for me everyone. Well check it you knuckle dragging backwoods yokel, he WAS speaking English. Let me guess, Trump supporter. Most ignorance can be removed with knowledge. Trump supporters seem to take pride in n their arrogant ignorance. Good luck

I have to return some videotapes.

Why don't you bend over so Sabrina can see your jerk

Pantera and Mastodon isn't "Death Metal" what a poser

I killed another girl with a chainsaw. I had to, she almsot got away. Theres someone else in there i cannot remember, maybe a model, but shes dead too

How much does it REALLY cost to book your favorite band for a show?
Motorhead frontman Lemmy worth less than $650,000 at the time of his death
For Today frontman offers non-apology to LBGT community, then deletes it
true stories? Or urban legends?
Varg Vikernes (Burzum): "I no longer play metal music"