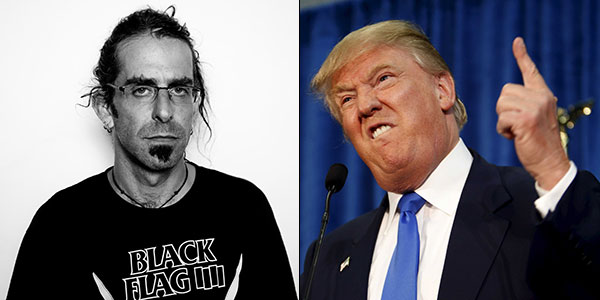 In a new interview with Metal Insider, Lamb Of God frontman Randy Blythe was asked about his thoughts on Presidential candidate Donald Trump. Not surprisingly (three months ago Blythe said 'fuck that guy' in reference to Trump), Blythe isn't a fan:


"I think he's going to burn himself out. I think he's going to say something so overarchingly stupid that people are finally going to be unable to accept what he's saying anymore. But I almost think he's a purposeful clown, a tool. I don't know if he really wants to be President. He might just be a foil for the Republican party to say, 'we gotta be tough right now in our international relations policy but not with this guy,' so they'll get someone who looks more moderate into office. They'll say we still need to be strong, hawkish right now but no, not Donald Trump. I mean.. it's ludicrous the things that he says. He's making shit up.

"...I'm trying to read between the lines here and see if that's what's going on. If they're in a back room somewhere and Donald Trump is saying, (in Trump voice), 'I'm gonna say that we should pull a Nazi Germany maneuver and make all Muslims wear a yellow crescent moon on their arm' like the Gestapo did with the Jews in Nazi Germany. He could just be a clown. If he is the president though, I am leaving America till he's gone."
Tags: Randy Blythe

1. trump said to halt muslim IMMIGRATION, not all muslims 2. halting immigration based on religion is a LITTLE different than death camps, JUST SAYING

Good get the fck out... Go back to Prague

Good, Randy... Make like a fetus and HEADOUT!!!!!!!!!! WE don't need anymore guys that fight like you did on that DVD we all saw. PATHETIC!

I seriously cannot understand what close minded fcks would support Donald Trump. There's not a single fcking thing he's said that will make this country any better. Everything he has said sounds like a statement from Westboro Baptist Church. And I thought everyone hated Westboro?

He could always move to Prague

Scientific fact: those who think Donald Trump is racist have significantly lower IQs than those in the opposition and are the sole problem of this country. Randy, as well as all other lower IQ humans may very well leave this country. Maybe they can relocate to China...?

Jesus Christ the way people toss around the Nazi/Hitler/Holocaust accusations is getting fvcking pathetic. OK, you can disagree, but what the fvck enough with that shit. It only demonstrates your hysterical outrage, and that you have ZERO CLUE what our constitution actually entails.

anonymous posted 41 minutes ago Scientific fact: those who think Donald Trump is racist have significantly lower IQs than those in the opposition and are the sole problem of this country. Randy, as well as all other lower IQ humans may very well leave this country. Maybe they can relocate to China...? report abuse Lol. It's a survey/statistic buzzsaw.... not a fcking fact you tryhard fascist.

Donald Trump and the vast majority of GOP candidates are a bunch of delusional bigoted xenophobes and the Hitler parallel is fairly accurate. Scapegoating the entire Muslim religion, stating that all Muslims need to be put in a database and that they must be able to be identified in public, then demanding a temporary ban on all Muslims coming to America (citizen or not) sounds fairly nazieske.

Maybe Randy Blythe can leave 'America' even if Donald Trump isn't elected. I'd be down with that.

Remember when he killed a kid.

"Hilarious how the ones flying off the rails about Trump are the same ones who instantly dropped to their knees with their mouths open for Obama in 2007" False. Moron.

Why is Randall's opinion even warranted in this situation. He kills someone and all of a sudden his opinion means something...? If you support Randall Blythe, you should douse your house in gasoline while inside and light a match.

""Hilarious how the ones flying off the rails about Trump are the same ones who instantly dropped to their knees with their mouths open for Obama in 2007" False. Moron." I take it back. I read this wrong.

Trump is an embarrassment. What's also embarrassing is saying that you are going to leave a country if you don't like who temporarily holds office.

"If you support Randall Blythe, you should douse your house in gasoline while inside and light a match." Yeah. I'll do that while fcking your dead mother and you cradle my balls in your mouth. Tell Ray "Djent" Clark to get off an article and go back to the Got-Djent webpage. I that's where this homosensual meant to post this melodramatic plea for penis. - Donalt Drump

Great leave! Move to Ireland! BTW those of you who think banning Muslims or any other group TEMPORARILY until we have a way to properly figure out why they are coming to the US are out of your minds, and when 500 people in NY, Boston, Chicago or LA are killed in a mass terror event I don't want to see all your stupid NY FD and Boston Proud shirts! Right now when we get 10,000 Syrians it 9,995 males between 18-35. Feel safe?

Truth bomb for the ignorant buttwipes out there: the constitution clearly spells out Congress has the authority to determine who is allowed to migrate here and from what country they come from, what religion they are, etc. Immigration is supposed to BENEFIT THE COUNTRY, not the migrant. Read a fvcking book.

Not surprised dumbasses on LambGoat actually like Trump. Very fitting of you guys who probably know as much about economics and politics as you do about music.. which means pretty much nothing at all

Always love when people make such bold statements such as these. Unless you hold dual citizenship, good luck with "leaving America." Unless by leaving, he means taking a vacation and returning after 30-90 days stay in a foreign country - because unlike the USA, other countries actually enforce their immigration laws. No visa, no stay.

Look @ that haggard white trash dork's mug shot on the left. Because his opinion really weighs a single fcking ounce, right? Emigrate to Czech you stupid pssy. I'm sure they'll accept you with arms wide open just like Europe has essentially instilled its own suicide with open borders.

Any updates on Randy leaving?

How much does it REALLY cost to book your favorite band for a show?
watch what happens when trash cans enter a mosh pit
Motorhead frontman Lemmy worth less than $650,000 at the time of his death
true stories? Or urban legends?
Alec Baldwin vs. Sean Hannity