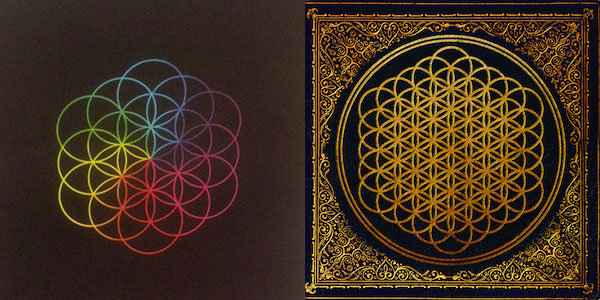 During the past few days, posters have materialized around London purporting to depict the artwork for the forthcoming Coldplay album. While this has yet to be confirmed, Bring Me The Horizon frontman Oliver Sykes isn't too pleased with the artwork's similarity to the cover of his band's 2013 album, Sempiternal:


Of course, the imagery is inspired by the flower of life symbol, something that predates both Bring Me The Horizon and Coldplay by thousands of years.

I really don't care about any of this, but can we please not use the word "steez", Oli? It sucks.

Cold play would beat their ass

TesseracT should be mentioned here.

They're different. fck off Oli.

Vices & Vessels. check them breasts out on fb.

I fcked oli's girlfriend once after getting tattooed

didn't he rip off Tyler The Creator one time? hypocrite much? douche.

That's what Oli gets for trying to sound like them.

you know how i know you're gay? you listen to bring me the horizon

The Coldplay version is better. I've never listened to BMTH, but I'm sure Coldplay is better in that respect as well.

how socially lacking do you have to be to think the BMTH kid is mad about this? this comes off as "lightly amused" at most. a basic ability to percieve tone seems like it'd be helpful for reporting news.

Oh stfu to all you lame lambgoaters. When the debate about most precious blood and thy art is murder came out, you all said they ripped it off when clearly it was still different in some ways. Now this debate comes out and you guys say it's not the same and they didn't rip them off when clearly they did. You people are fcking stupid. Go lick more windows.

Funny. BMTH started their career by self admittedly ripping off at the gates. fck BMTH. No care.

How much does it REALLY cost to book your favorite band for a show?
Earnings & attendance for A Day To Remember, The All Stars Tour, Wovenwar, more
Against Me! singer has kind words for supposed Slipknot drummer Jay Weinberg
earnings & attendance for Ozzy, Faith No More, Ministry, Coal Chamber, more
Tim Lambesis and Nancy Grace. Together. On a TV screen.