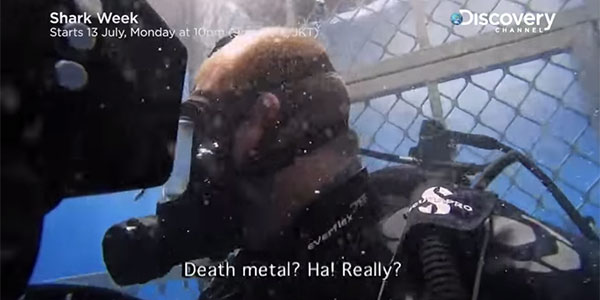 As you know by now, it's Shark Week on the Discovery Channel. One of last night's new specials was 'Bride of Jaws', in which filmmaker Andy Casagrande and company attempt to find an 18-foot great white called Joan of Shark who was last seen several years ago off the coast of Australia.

Among the techniques employed to lure great whites is blasting metal music via an underwater speaker, because supposedly "the dense tones of heavy metal simulate the low frequencies of struggling fish." To that end, a few Darkest Hour songs were played and several sharks did indeed show up for the "concert." True, I wouldn't call the songs chosen "death metal," but whatever, cool nonetheless. Here's a clip:

Should have played Cana strain

Should have played Shark Attack.

Should had played Chum Fiesta

Demons would have at least sounded good ...

When that one skinhead told the other skinhead to play his favorite music, I thought we were going to get some skrewdriver in this bitch.