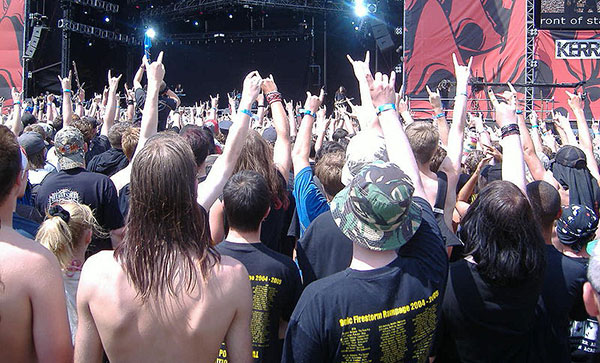 A study recently published in the journal Self and Identity concludes that contrary to 1980s research, young metal fans in the 80s did not roundly suffer poor developmental outcomes. In fact, it turns out that 1980s metalheads "were significantly happier in their youth, and better adjusted currently."


Results revealed that metal enthusiasts did often experience traumatic and risky "sex, drugs, and rock-n-roll" lives. However, the "metalhead" identity also served as a protective factor against negative outcomes. They were significantly happier in their youth and better adjusted currently than either middle-aged or current college-age youth comparison groups. Thus, participation in fringe style cultures may enhance identity development in troubled youth.

Don't start pumping your child's ears with Slayer or The Black Dahlia Murder just yet, however, as Pacific Standard does highlight one caveat: The study was composed of individuals who were "relatively high functioning" and volunteered to participate. This would of course likely eliminate anyone who ultimately fell victim to drug addiction, suicide, or any other negative outcomes of "a dark lifestyle."

Fortunately, research team leader and Humboldt State University psychologist Tasha Howe reports that "metalheads in general were not significantly more likely to attempt suicide or have sex at earlier ages than other youth. Nor were they more likely to miss work due to physical or mental health problems as adults."

See, we're not all going to grow up to be total losers!

the late 90s early 00s juggalo/nu-metal fans are very likely in their early 30s as we speak.

Smoking meth out of an Old Milwaukee can

They weren't able to interview people that committed suicide? Imagine that.

How much does it REALLY cost to book your favorite band for a show?
watch Every Time I Die guitarist stop onstage selfie with karate kick
true stories? Or urban legends?
Venom frontman Cronos says Henry Rollins is "a fool"
earnings and attendance for Warped Tour, Atreyu, In Flames, Helmet, more