Mon, June 29, 2015 7:09 AM PT
Unless you call a rock home, you're aware of the Supreme Court's decision late last week to legalize same-sex marriage across the United States. While the decision was roundly praised amongst those in the metal community who chose to acknowledge it, there was at least one guy who didn't appear to be particularly pleased. In addition to drumming for A Skylit Drive (and formerly for Motionless In White), Brandon Richter also lifts weights and talks about Christianity. He seemingly serves as a spiritual guide for a small handful of people (e.g "For more guidance and or if you want my advice or help on how to live a better life just contact me. I am here to help you"). On Saturday, Richter took to Instagram to communicate his thoughts on the new protections for gay marriage: 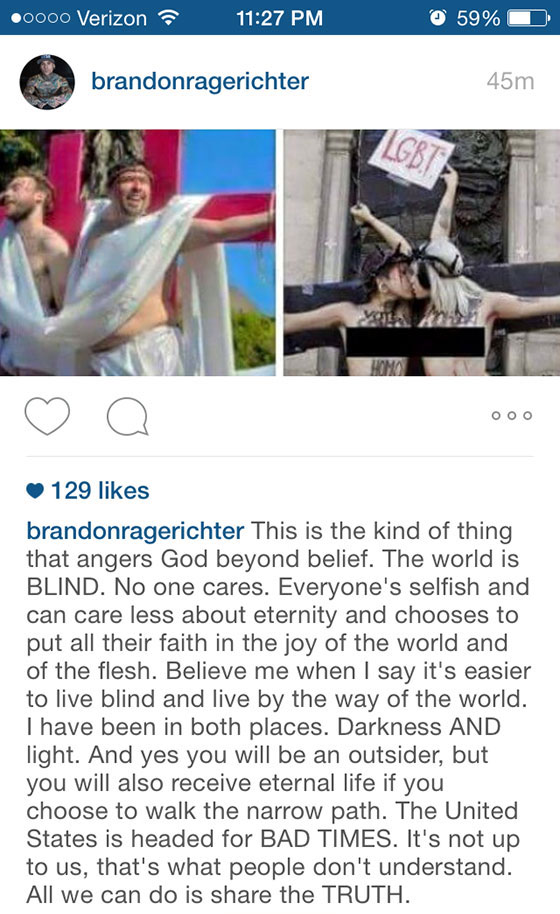 Thinking better of himself, Richter deleted the post within the hour. However, not long thereafter, he reposted it, this time trying to explain that his statement wasn't about gay marriage or equality, but rather about the imagery that mocked God. Of course if you read his statement again, this explanation makes no sense whatsoever. Richter apparently realized this and quickly deleted the image yet again. Vacillate much, Brandon?

Ironically, his band posted this image on Facebook yesterday, and called the decision "a proud time for our country!" I wonder how awkward the next A Skylit Drive practice session will be? 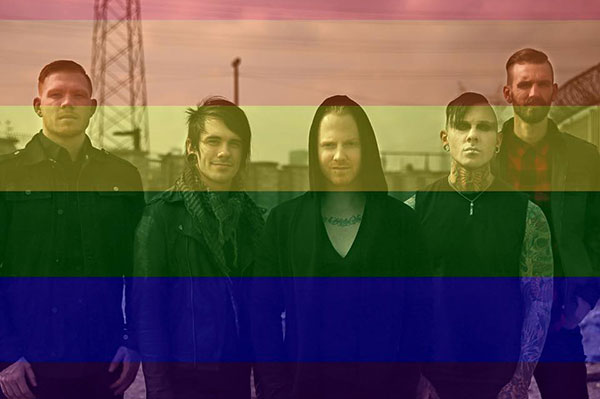 pump your brakes, chief. even that imaginary God of yours finds that picture of those two broads kissing on a cross insanely hot.

Getting gay with kids is here!

Obviously Brandon hasn't sucked my big black d yet. I penciled him in for July 7th, 3:30pm. The doctor will fix him right up :) - The Coc Doc "Saving boys lives since 1974" Thank you and god bless ~~

Pretty crazy, because their old drummer was actually super gay.

What a strange opinion coming from a gay.

Yes, tell us about the truth oh obviously well educated and enlightened one. About how having fun with another consenting adult will condemn your other worldly specter-like "soul" to an eternity of extreme suffering in various ways. Ya cook

chicks with dicks are stoked.

When I see pics of these teen-core bands, I like to picture them as a bunch of broke, emotionally unstable Starbucks employees on their break posing for pics to feel important.

Government shouldn't be in the marriage business AT ALL. gay or straight. fk everything about this whole debate. and...lol @ shaming someone who expresses their belief since it differs from yours. you're better than that webbster. bigotry works both ways, and i don't see anywhere that kid said he hated gay people or anything. grow up.

Guy needs to eat every ounce of poop

The entire band is one big gay marriage so what's his problem?

He puts make up on takes selfies. Let he who is without sin cast the first stone, fraggle rock.

FRONZ HERE, THIS IS A BIG MOMENT IN HISTORY. WHEN IM NOT STAYING SIC, I SPEND MY TIME GETTING UP ON THE NEWS. ITS TIME TO START A GAY PARTY WITH THE BOYZ. I KNOW I SAY gay ALOT BUT SUCK MY fck!! I LOVE THE GAYS!! PACK SHIT SKYLIT

LEAVE IT TO "THE FRONZ" TO CHIME IN ON A HOMOSEXUALITY POST...

How much does it REALLY cost to book your favorite band for a show?
watch Every Time I Die guitarist stop onstage selfie with karate kick
true stories? Or urban legends?
Venom frontman Cronos says Henry Rollins is "a fool"
earnings and attendance for Warped Tour, Atreyu, In Flames, Helmet, more