Slipknot frontman Corey Taylor is not yet self aware 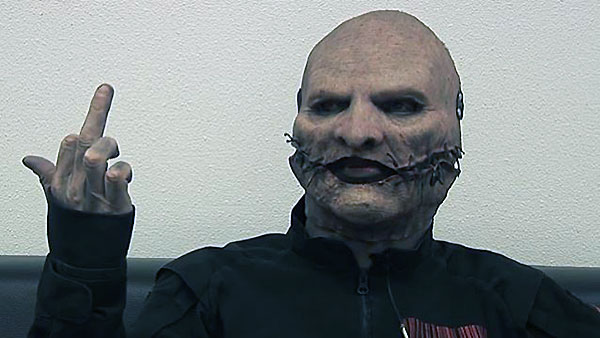 As you may or may not know, Slipknot vocalist Corey Taylor will soon be releasing his third book, titled You're Making Me Hate You. To help promote its forthcoming release, Taylor recently provided an excerpt of the book to The Guardian, which you can read here.

I skimmed the excerpt and was intrigued by this portion:


Yes, I worry about what the aliens will think of us. I'm no ancient astronaut theorist. I don't think we've been visited by a more advanced species. I don't think they're plotting to come invade. I think if they're watching, they're doing the same thing I am: wondering why the fuck you people are mesmerised by all of this half-assed entertainment. They're sitting in their spaceships watching our habits and they've come to the conclusion that we're all apes in designer clothes. They think we're fucking dumbasses. They are amazed that we can feed and shelter ourselves with all the stupidity we involve ourselves with. Worse yet, they believe our stupidity is contagious. They think that if they come here to make contact, they might catch our "dummy" virus. It scares the living … well, whatever they call their poop, that's what gets scared out of them. And these amazing beings, beings beyond our capacity to understand, are leaving us alone. They have quarantined themselves from us. They ain't coming back until the house is empty and the lights are all off, and only then they'll wait to see if there's still any "stupid" blowing around in the wind. They're keeping their distance, which is a disappointment to me. That's because I really wish they'd come back to pick me up and take me with them. With all the brain damage in the world today, you can't blame me.

That's an interesting take that I've not yet encountered. Aliens are worried about catching our "dummy" virus. I laughed when I read that, because it's a compelling notion. But my amusement was quickly replaced with befuddlement. Here's a guy who puts on a silly mask and takes the stage to play metal music with a bunch of other guys in goofy masks, one of whom beats on a beer keg, and he's worried about humans looking like "dumbasses" to aliens? This begs the question: has Taylor identified the problem, or, is he the problem?
Tags: Corey TaylorSlipknot

He sounds like a 15 year old that is just hitting puberty. What a fcking idiot.

I blame the kardashians and Caitlyn Jenner.

A grandpa still puts on a mask.

hate him or not. slipknot is a very known band and he has written 3 books. doing more than posting on here shit talking every post.

He is very much the problem. God help the kids who read this tripe from one of their role models.

The fuct up thing is that if I was asked to write what corey taylor thought of humans, aliens and first contact, I'd write something very similar. Sad when you read something and know someone had to edit all of it.

Shit "journalism" webby. Still asshurt because Mr. Taylor won't respond to your interview request? Report the news and keep you biased opinions to yourself, you self important pssy.

"I don't think aliens visited, but I know they visited" Summarization of this uneducated rant.

"It scares the living … well, whatever they call their poop, that's what gets scared out of them." A 41 year old wrote this.

Here's a guy who puts on a silly mask and takes the stage to play metal music with a bunch of other guys in goofy masks, one of whom beats on a beer keg, and he's worried about humans looking like "dumbasses" to aliens? This begs the question: has Taylor identified the problem, or, is he the problem? ...Yet Lambgoat still gives these guys tons of press.

How much does it REALLY cost to book your favorite band for a show?
irked ex-Black Sheep Wall frontman releases their new song with his vocals
true stories? Or urban legends?
A Skylit Drive and their drummer probably don't agree on gay marriage
Two Assholes (Dave Mustaine And Chris Barnes) Argue On Twitter