watch Attila members almost get in fight at Atlanta restaurant 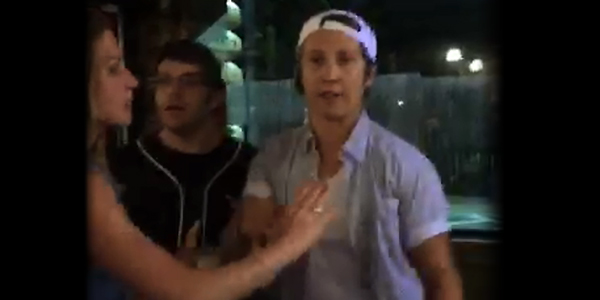 Attila members Chris Linck and Sean Heenan were dining at an Atlanta restaurant this week when some dumb drama took place. We were sent the video by someone. That someone provided an account of what went down below. We can't corroborate any of it, nor do we have the energy to do so. Regardless, here's a summary: Attila members almost get in fight, but their wise girlfriends seem to steer them away from trouble. For the record, we don't condone heckling bands. We also don't support obnoxious band members. We're not if either of these things took place, but this is the video.


Attila guys are just being loud, offensive and inappropriate customers (they were drunk because it was Chris' birthday that night) so I instantly think "Wow, this group of dudes really fucking suck."

*that's before i even know they're in that fucking band*

Anon - "I like your shirt."
Sean - "Thanks man."
Anon - "Just kidding. That band sucks."
Sean - "Oh really? I'm the drummer for that band."
Anon - "Dang. Well if I gotta give you anything at all, your music videos are sick."
Sean - "No. You're lying."
Amon - "Nah. Got the hottest bitches ever in your videos."
Sean starts a snap chat video of all of us to show his snap chat people all his haters. Then he walks over to our other group of friends across the restaurant and says
Sean - "Those guys say my shirt sucks. You think this band sucks? I'd say they're just a bunch of haters. How about you?"

*starts walking back towards us*
*Anon friend responds*
"Yo, did he just ask us if Attila sucks?"
*another friend at that table replies*
Anon group "Yes"
*Anons friend says out loud*
"Yeah dude, that band does fucking suck."

*sean walks back over to that table*

Sean - "Idk who said that but this guy right here has a jersey of a dude that I actually go out to beat with. So why don't y'all take that haters. Bet y'all can't be doing that."

*sean walks back to us*
*Anon looks at Chris*
Anon - "So are y'all gonna leave now or just stand here and chit chat with us? Are you in the band?"
Chris - "Yeah I'm the guitarist bro."
Anon - "Dayummm. But for real, y'all tryna leave yet?"

Chris - "Oh we're leaving. We don't even want to be around you faggots."

Anon group "Alright. Then leave."
*chris leans closer towards me*
Chris - "Oh, we're gonna leave. We're gonna leave."
*Anons friend gets in between us and tries backing him off.*
Then you see everything from there in the video.
Tags: Attila

The guitarist also pushed a girl that was at this, so that's fcking important too lol

fck Atilla. But fck those annoying gays in the restaurant too.

no names yelling at no names hating on no names, with the end result of no names taken. weak posturing on all parties.

Damn fck that jip joint then, its Chris' bday and no shotz for the boyz??!! Later.

FRONZ HERE. HA IF I WAS THERE THIS SHIT WOULDNT HAVE HAPPENED. SORRY BOYS YOU GUYS ARE ACTING LIKE PUSSIES YOUR GONNA GET 20 BUCKS DEDUCTED FROM YOUR NEXT PAYCHECK.

YO fine. It was me http://lambgoat.com/users/ profile/Jemenez_Cricket IG @theprocessof_ I just didn't wanna exploit my friends ;)

attila's the miley cyrus of something

The girl that filmed this is quite flaming pile of dog crap and probably apologized to them right after because her B.F band (rotting out) Broke up and she's looking for a new pecker to suck on. fck hardcore sluts.

That kid is a pssy gay. That's what you get when you talk shit to people who are more successful than you. fck you kid. You are lucky you are not In a hospital. Eat shit!

The comment about " that's what happens when you fck with people more successful then you". What the fck are you talking about ? Did you not watch the fcking video ? Attila gays got scared and let there gfs push them out of the place. Sorry bro. But Attila would of gotten their asses handed to them. It's only s matter of time before that band really does get fcked up. lol. Attila sucks #TRUTH

I don't know what kind of music you all listen to, and you can day Attila is a shitty band all you want.. but they would of beat those kids asses. And yeah, just cause all you c-ckwads think they're "unsuccessful" you should see the new houses all of them are purchasing. Talk shit some more jerks, Attila loves that shit. They thrive off of it, fcking pussies. Better band than anything that gaygy kid in this video will ever be in

Being in a shitty band that pays doesn't make you tough. They're still little bitches and they're ruining metal.

you wanna be in a shitty untalented band and make a bit of money be prepared to get some shit sometimes....your band does suck get over it

Actually I would have beat all of their asses by myself. You're a pssy if you have to get your girlfriends to drag you out. 14 against 4. ¯\_(?)_/¯

I feel bad for that guitarist's mother - seems like he was raised to be a nice wholesome boy but went rogue.

the bitch holding the camera sounds like a feminist dike. real tough hiding behind your phone

Guys,this band isn't successful. And they are dweebs.

horrible band, but the pussies who talk shit on bands because they suck at life even more....

Atilla obviously was gonna get their ass beat. If they weren't then they would've stood their ground and not leave like a bunch of wimp poser bitches. They are commercial as fck and their music is a joke. How the fck do you define successful? Give me an Atilla song that's gonna last years from now. fck them. Props to whoever posted this.

'wise girlfriends'? hahaha...not really wise if they are dating the pleasures in that f**king band of dicklords

This band doesnt give two shits about their fans, for the record. They promise shit and do not come through.

FRONZILLA HERE AGAIN! YEAH GO AGEAD AND TALK SHIT gayGETTES! THAT SHIT JUST FUELS US UP AND SHIT! THERES PROBABLY ENOUGH FUEL HERE FOR ALL OF OUR MEMBERS TO MAKE ANOTHER ALBUM LOLOLOLOL! YOU PUZZYS SHOULD HAVE THOUGHT ABOUT THAT WHEN YOU WERE FUELING US UP HAHAHA!

hey "Fronz" lemme know how my dick taste, next time you kiss your girl...

More like Sean hymen, am I right? Also, this band is turrible. shoulda gotten their asses kicked.