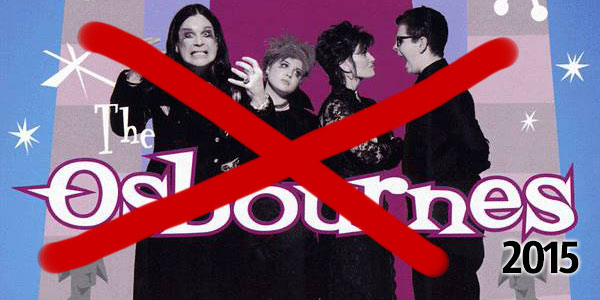 So much for the return of The Osbournes. The reality show, which originally ran for four seasons on MTV, had been expected to return for a limited run this year.

"We are no longer talking to the Osbournes about a series; that's not going to happen," Susan Levison, exec VP original programming and production at VH1, told The Hollywood Reporter. "We wish we could have worked it out, but it just didn't come together for us. The family has been absolutely lovely and we wish them the best. We'd love to figure out a way to work with them at some point in the future."

The decision to scuttle the revival is somewhat surprising, given the fact that family matriarch Sharon Osbourne had publicly announced its return last fall.
Tags: Ozzy Osbourne

I'd love to figure out how in the world anyone could watch them for an episode let alone a whole season.

Leave the old guy alone! Network just sees ratings by exploiting the way the legend talks and acts. Peace for the Oz-man.

"We wish we could have worked it out, but it just didn't come together for us." aka $$$

How much does it REALLY cost to book your favorite band for a show?
watch what happens when trash cans enter a mosh pit
true stories? Or urban legends?
Motorhead frontman Lemmy worth less than $650,000 at the time of his death
King Conquer ex-member says the band left him on the side of a Texas road