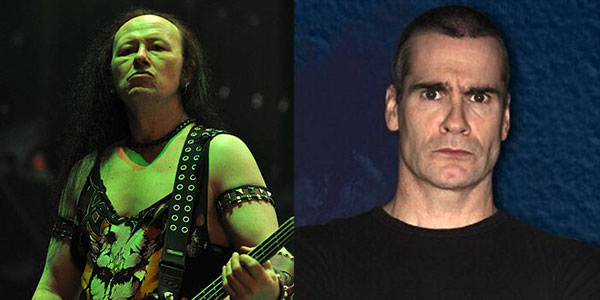 In his 1994 memoir, Get In The Van, Henry Rollins had some rather unflattering things to say about British metal band Venom. Recalling a 1986 show in which Rollins' band Black Flag opened for Venom, Rollins had the following to say:


"Venom took almost an hour to get onstage. They had roadies tuning their guitars and shit. Finally, they hit stage. They were hilarious. It was like seeing Spinal Tap. The drummer had a guy that held an electric fan next to him and kept him high and dry. The singer/bass player was named Kronos [sic]. He had some great raps. He got the crowd to chant what I thought was 'Black Funky Metal' over and over, which I thought was pretty cool and then I thought that maybe I was wrong about these guys. I found out later that it was 'Black Fucking Metal.' Oh, excuse me. I expected them to go into [the Spinal Tap song] 'Sex Farm Woman' at any second. The guitar player was so bad it was painful. I had a great time. The bass player was hilarious. He would wiggle his tongue and roll his eyes. But he also would fix his hair every fifteen seconds or so...

"After an hour of 'I can't fucking hear you!' they said, 'Good fucking night, New fucking Jersey!' and ran for the dressing room.

"Venom is weak. Everything about them is weak. They can't even play. They had a bunch of roadies to do everything. Weak, weak, weak. I would love to play with fucking 'heavy metal' bands more often. It was fun crushing them. It's all lights and makeup. What bullshit. Venom suck. They are so full of shit. What a bad joke. They don't sweat and they probably don't even fuck."

Wow, I wonder how Henry Rollins feels about Venom? Anyway, fast forward 20+ years later and Venom frontman Conrad "Cronos" Lant has finally retaliated. In a new interview with Mitch Lafon of the "One On One With Mitch Lafon" podcast, Cronos responded to Rollins' remarks:

"When we got there, they were just like fucking chidren; they couldn't play, they had no fucking instruments, we had to lend those guys the backline. They arrived at the show with their fucking little care package with their sandwiches in it and a bottle of orange juice. It was, like, 'I thought you guys were in a band. I thought you were musicians.' And they just cried about everything. We couldn't stop laughing at them. But for those guys to arrive at the show with their mom, and their mom's, like, sort of, like, telling everybody what to do. And she gets into an argument with our manager. And our manager just told her to fuck right off. She was, like, 'We were promised a dressing room.' And it's, like, 'Yeah. There's the room in there.' There's, like, three chairs in it. We don't own the venue. We just turn up. We're not interested in the backstage; we're interested in the stage. We're here to play a concert. Behind the stage, there are some rooms. There's a toilet in one of them and a chair and a table. That's your backstage. This is the reality of rock and roll. It's the backstage. Ah, she cried her fucking eyes out.

"But those guys were such fucking children. And for all of this about how he stood and watched the VENOM show and couldn't laughing with his friends. As soon as they had finished playing, they got in their [van] and left. So I don't know what show he watched, but it certainly wasn't the VENOM show. And also, if you read the book, he got the date wrong of the gig. [Laughs]

"This is why Henry Rollins writes books and is no longer in a band. Because he's not a fucking musician; he's a fool."

Pretty sure Rollins could feed that dude his teeth.

They should redo Grumpy Old Men. Cronos, that hairline...

Rollins destroys Cronos with a glare

Thought I saw Cronos on "The View" the other day, but it was actually Kathy Bates.

I have to agree, Rollins is a self-righteous c-cksmoker.

This story as well as the comments are ridic entertaining

Venom only had ONE good song.

They don't sweat, and they probably don't even fck.

That whole "they don't sweat and they probably don't fck" quote is such an odd and rather uncharacteristic thing for ol' Hank Garfield to say. Sounds a bit misogynistic, no? Especially for him. Either way, I'm with Cronos on this one. These guys were always in on the joke while every dumbfck out there thought that Venom was serious. INFERNAL HAILS TO THE OG BLACK METAL TROLLS!!! Welcome to HELL, POSERS!!!

Battle of The Eyebrows II: The Haves and the Have-Nots

cronos owned him with the mommy comments

henry rollins pretended to do music for a grand total of 20 minutes before being an attention whore for the next 30 years... venom are still on the road. In all honesty you can prefer black flag all day but can anyone really believe that they are superior at their instruments??

Henry Rollins is a legend compared to these fcken gays. And i'm not one of those gay ass, over obsessed fanboys. I just appreciate great music, and i detach myself from trash.

Has anyone seen Cronos and Glenn Danzig together in public? I think not- Cronos=Glenn. Henry & Glenn forever.

unreleased entry from Get In The Van, circa 1986: "Another shitty venue, another shitty bologna sandwich. God I hate bologna, god I hate Greg."

i'm pretty sure i saw cronos shopping at your local Ladybug fashion outlet in your local strip mall, that forehead is undeniable!!! you can read his thoughts...

fck ROLLINS, HE IS SO PUNK THAT HE DOES HISTORY CHANNEL SHOWS TALKING ABOUT GOVERNMENT SHIT, VERY PUNKY.... CRONOS IS A BADASS AND A TRVE MUSICIAN

just because you drag your lame joke band out for 30 + years doesn't make you a *real* musician. rollins was in a band that was influential. venom is entertaining...kind of, in a way. i hate to make a value judgement here because, to each their own but which is more important? "my war" or "witching hour"? are you seriously going to hold up "black metal" against "rise above"?

I don't know much about Henry Rollins, I know he was in Black Flag, I haven't got into much Black Flag but just by looking at him, you can tell he is a punk ass, self righteous douchebag/dick who only uses intimidation to get his point across. Venom aren't great musicians either but they admitted it on the Combat Tour with Slayer and Exodus. But both Venom and Black Flag were very influential to thrash metal so thank you venom and black flag.