Mike Portnoy pissed that hospital wouldn't treat him like someone important 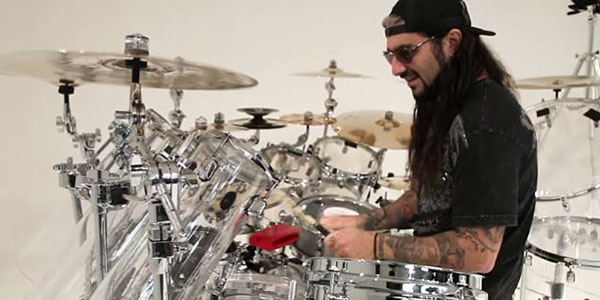 Former Dream Theater drummer Mike Portnoy, currently on tour in Europe with The Neal Morse Band, visited the Whittington Hospital in London, England today, hoping to receive treatment for an illness. Unfortunately for Portnoy, hospital staff did not care that he was hours away from playing a show and did not see him in time, forcing Portnoy to leave without being treated. Portnoy had the following to say:


"A very special NO THANKS to the staff at the Whittington Hospital for NOT seeing me regardless of telling them that there is an audience waiting for our show to begin...I finally left withOUT seeing a doctor in order to make tonight's show...I have no idea how the hell I'm going to make it through this show...I can't even stand up or lift my arms..."

While I feel sorry for Portnoy on a certain level -- hospitals are annoying and unless you're dying, you aren't being seen in a timely matter -- there's no way you can issue that statement without sounding like a jerk. And the reaction to Portnoy's Facebook post was predictable. 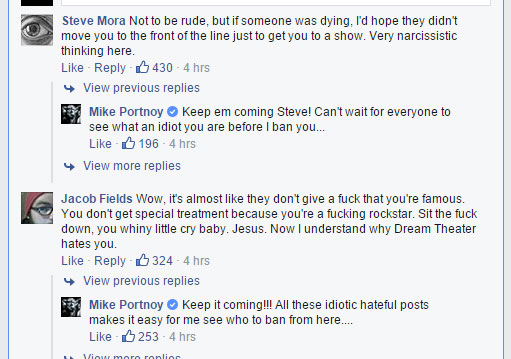 Quite simply, Portnoy is not a big enough star to receive special treatment. While not an obscure musician, he's no James Hetfield, Lemmy, Dave Mustaine, or Rob Halford. Those guys wouldn't be waiting around for treatment; they'd either have a private doctor attend to them, or be whisked right through the hospital line.

Look on the bright side, Mike, I don't think John Petrucci or James LaBrie would be getting special treatment either.
Tags: Dream TheaterMike Portnoy

'Look on the bright side, Mike, I don't think John Petrucci or James LaBrie would be getting special treatment either.' Nor would they complain about it, though.

If he couldn't lift his arms then why did he even bother going to the show? Lol

"I can't even stand up or lift my arms, but I can sit and type and ban people with logical statements. IM THE DRUMMER DAMMIT"

he sure had no trouble lifting his arms to type all that nonsense. portnoy is a self entitled jackass

He did Dream Theatre a favour by disassociating himself from them. Also, he's a giant piece of shit for expecting preferential treatment in a HOSPITAL.

"Look on the bright side, Mike, I don't think John Petrucci or James LaBrie would be getting special treatment either.'' 'Sucks his dck! Captain Sex!!' - James LaBrie

I don't care what any of the pssy fanboys think about this prick and his stupid drum kits that are like 70% splash cymbals. Mike IMPORTnoy sucks as a drummer and as a human being! "OMG! U sed he sux! U don't know shit about drumz!" I've been playing for most of my life & I'll play this overrated shitbag under the table! Same fills, same hat, same attitude. Beady eyed bitch. Buddy Rich, Billy Cobham and Damon Che called, they all said that you play drums like Michael J Fox plays Jenga! SLOPPY!

anonymous posted 17 minutes ago "Look on the bright side, Mike, I don't think John Petrucci or James LaBrie would be getting special treatment either.'' 'Sucks his dck! Captain Sex!!' 'ELASTIC RUBBER DAVES!!!' - James LaBrie

dude has been a working musician for decades and still doesn't realize that talking shit on social media is a bad PR move. Especially when you already have a rep as an jerk, and especially when your dumb wife replies to the comments

^^ Oh no. Now you've done it. Do you even know the kind of backlash you're going to get from the goaters here? Mike Portnoy is like a god around these parts! You're gonna get freaking lynched! Lamegoat is the only place I've seen people express how much better Paul Bostaph than Dave Lombardo. I have never heard anyone say that in real life. The Internet is weird.

I do not know who is worse: If Portnoy or his stupid fanboys that defend any shit he posts. Porr devil! fck YOU! You are a shame, overrated drummer, overrated as a human being

The only wrong thing he did here was to post this.... I think he at least deserves to get some sort of "advance" treatment under the label's or tour manager's care because they are performers from another country. But yeah, this post was a bit disappointing, Mike. Still a big fan though. :)

"He did Dream Theatre a favour by disassociating himself from them. Also, he's a giant piece of shit for expecting preferential treatment in a HOSPITAL." A few years back he seemed to also think he deserved preferential treatment when A7X were done with him and he threw a fit about DT not kicking out Mangini and inviting him back.

I had to Google who this dude was. And the so and so named band, sounds like a bar band. Similar to The Rod torfulson Armada featuring herman menderchuk, only more people know and like that band...

Look at this gay. Thinking he's important and above everyone else.

He probably got a drumstick up his ass

He wasn't kidding about banning either. I was banned for simply not agreeing with him. No longer a fan.

How much does it REALLY cost to book your favorite band for a show?
Slipknot guitarist says band has never made money from record sales
Motorhead frontman Lemmy worth less than $650,000 at the time of his death
Scott Ian of Anthrax recounts the firing of Dave Mustaine from Metallica
true stories? Or urban legends?