Adam D. is loaded! You believe those celebrity net worth websites, right?! 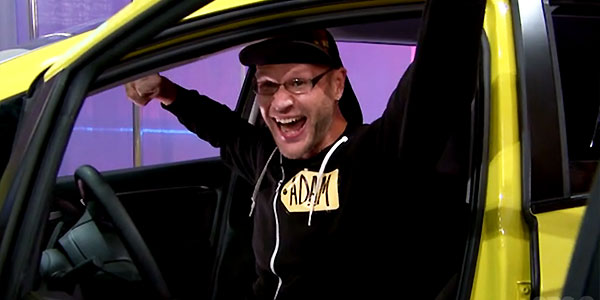 So, if you spent yesterday in a coma, you may have missed the fact that Killswitch Engage guitarist Adam Dutkiewicz won big on The Price Is Right. Basically, he won more than $50,000 in prizes, including both a new car and a new truck.

Amongst the landslide of congratulatory reactions yesterday were a smattering of the inevitable, "Yo, Adam D. is already rich. He should give that stuff to charity!" and "figures a guy who is loaded to begin with would win a bunch of crap he doesn't need."

There is actually some truth to that sentiment. Killswitch has sold a lot of records; in fact, they have two Gold albums. Moreoever, Dutkiewicz is also a producer and an engineer. In addition to producing most of Killswitch's albums, he has produced or co-produced a handful of notable releases, including Underoath's Define The Great Line album, which was certified Gold in 2006.

Anyway, I would hope Dutkiewicz has some money, however, it's not like he's a multi-millionaire. Then again, maybe he is. I was perusing the comments to our Adam D./Price Is Right news this morning, and noticed the following comment:

Weird. Eight million dollars, huh? I wondered where that number came from, suspecting that it was from one of those "What is [random celebrity]'s net worth?" websites. Indeed, a quick Google query led me to CelebrityNetWorth.com, which has Dutkiewicz's net worth listed as $8 million. They cite no facts or figures for their assessment, so I guess I'll just have take their word for it (no, I'm not taking their word for it).

Veracity aside, I thought it would be fun to check out what this website had to say about a few other semi-well-known musicians from our corner of the music world, which you can check out below (obviously, Mr. Lambesis doesn't have much money anymore). Anyway, Adam D. has more money than you and I, but I have no problem with him winning some new stuff.

Hey, Adam, Buddy, Dave, etc... can you please email me your net worths so that I can figure out just how accurate these figures are? Thanks, guys.
Tags: Randy BlytheDave LombardoAnthony Greenbuddy nielsenKillswitch EngageTim LambesisAdam Dutkiewicz

wait a second. if Tim Lambesis was worth 4 million, why the hell was he crowdfuning Austrian Death Machine? I feel like one of those albums couldn't possible cost all that much to make.

He probably cried funded the album because he didn't want to use his own money and the label wouldn't fund the project. No one really wants to use their own money because the music business is a gamble and you may not see a return.

It makes sense. KSE is pretty huge and he does a lot more then just KSE.

You can't float all the money for Austrian Death Machine and the upfront costs required by a hitman at once! Duh!

How is this any of our business? Pecka Juice

Why are people such haters. I don't care if he's worth 500 billion. He works hard for his money and his success. I never understand why people say, "he/she is rich, he/she doesn't need that." Those people I like to categorize as "haters" Pathetic.

Yeah, Lambesis is not nor was ever worth 4 million. It's possible that these numbers come from total earnings of these peoples respective bands rather than just the persons cut after splitting between members, management, agents, lawyers, ect. and that its a total generated over their lifetimes rather than what they currently have after all expenses, but half of these figures are commplete bs

Net worth is just a fancy term for total wealth- not total amount of $$ (cash). Wealth includes all assets from cars, to houses, boats, music gear, everything that one owns. It is easy for me, at the very least, to see how someone like Lambesis is worth 4mil in total assets.

How much does it REALLY cost to book your favorite band for a show?
Motorhead frontman Lemmy worth less than $650,000 at the time of his death
true stories? Or urban legends?
Venom frontman Cronos says Henry Rollins is "a fool"
watch a naked guy tear up the mosh pit