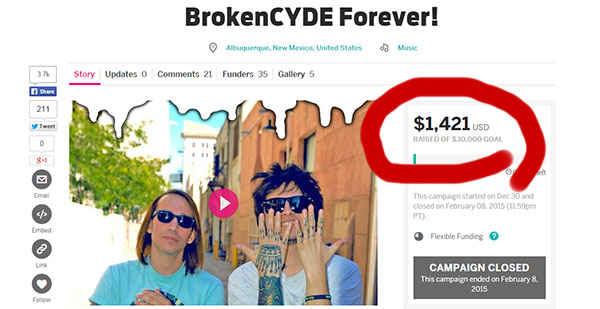 Little more than a month ago, we reported the New Mexican crunkcore (ewww) band Brokencyde had launched an Indiegogo crowdfunding campaign to raise $30,000 for a new album. Well, said campaign has ended, and the band managed to raise a whopping $1421. Yes, that's right, they raised less than 5% of their goal. In total, 35 people donated to the cause. Note that the band has roughly 696,000 followers on Facebook. Ouch.

No word from Brokencyde yet regarding the plight of the album. We'll hope for the best (i.e. the worst).

Attention all wack ass metalcore bands that are popular right now: This is you in 5 years.

Said it before but this band used to make 5k+ a show in merch and play 600+ cap rooms. At hot topic alone they did over 200k in shirts. Now look

^fckers from Brokencyde on lambgoat ohh shit they butt hurt

These guys haven't fcking died yet?

I remember when this bs was taking all the attention away from real bands. Eat a dizzle

Hate this band. As if they are a real thing. I should crowdfund to prevent a Brokencyde album from ever happening.

This must really have them brokencyde.

Unfortunately that's still enough for them to record an album

Shitfest gimmick band appropriately has abysmal crowdfunding campaign. This and more at 11pm, only on Lambgoat News.

This story would be better if the crowdfunding campaign ended with these guys getting AIDS.

that's what happens when al your fans are 13 or younger.

It just proves that no one is willing to pay for the music they love and consume.

anonymous posted 1 hour ago that's what happens when al your fans are 13 or younger. report abuse "Mom can i have my allowence early so i can donate it to the Brokencydes? They need to keep their bongs filled, moar liquor bottles, and need software besides a pirated copy of fruity loops.."