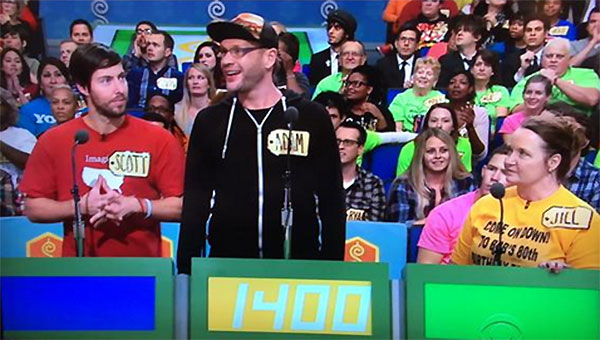 The singer of Cattle Decapitation was there too and you can see him in the green shirt in the back of the audience.

he's gonna love paying the taxes on that shit right after he gets off stage. yay!

awesome, now he'll only have to pay like $20k in taxes to keep all that shit.

This is freaking hilarious. Adam is the funniest dude.

Yeah, taxes will be a big issue with his band doing the business they do and his producing. Good for him

Taxes won't be an issue, the show offers you the items Taxed or they pay you out a lump sum of cash that is also taxed but hey... It's still cash.

No trust me he'll have to pay taxes. Some lady won the whole showcase to and at the end she was brought backstage to some guy and that guy said she has to pay taxes and all she won a car and a trip and the rule was either you pay taxes or you wont get any of these items

oh no! you mean he has to pay taxes on bunch of shit he got for FREE? who cares. you must be a bunch of broke ass bitches if that's really what you are worried about.

Awesome! This guy is a riot! Can't wait for the new album! Return of Jesse Pt.2!

#33 to win a car. Sponsored by the Free Masons.

He is worth 8 million dollars. I highly doubt he can not pay the taxes on the showcase lmao

You dont get to cash out your prizes. You have to pay the taxes upfront or you forfeit the prizes. They have lots of prizes that never get claimed because people cant come up with the money.

Love how the slightest bit of good fortune for anyone just opens the shit-storm to begin raining down. Fix your own jealousy issues first, douche wipes.

anonymous posted 9 hours ago He is worth 8 million dollars. I highly doubt he can not pay the taxes on the showcase lmao what world do you live in?

All the people Bitchin about him having to pay the taxes, I say for some reason I think the guitarist from kollswitch can afford it, so pleases calm your t-ts because they seem to be flipping hard.

He said Hi to his dog Steve. Pretty funny. Good for him.

What a doofy goober.

I bet drew didn't even realize how much famous Adam. Was compared to.him

How much does it REALLY cost to book your favorite band for a show?
Motorhead frontman Lemmy worth less than $650,000 at the time of his death
true stories? Or urban legends?
Slipknot guitarist says band has never made money from record sales
Melvins' Buzz Osbourne thinks Rob Zombie is an asshole