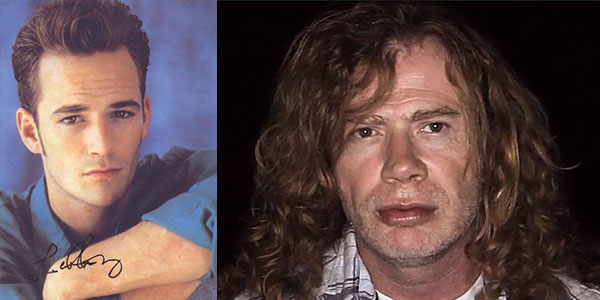 Former Beverly Hills 90210 hearthrob Luke Perry has revealed that his role in the British feature film 'The Beat Beneath My Feet' was partially inspired by Megadeth frontman Dave Mustaine.

In an interview with Independent, Perry, 48 years-old, had the following to say:


"I thought about the gentleman from Megadeth, Dave Mustaine. He was a guy who had a lot of trouble in his life because of different issues. He got asked to leave one band and started up his own band. Something happened to his arm and he was challenged physically to play the guitar. I thought, 'There's something inside that guy that really drives him to overcome all those things and find his way back to making music'. So I wondered about that a lot when thinking about the challenges he had to overcome..."

The comedy-drama film, nominated for British Independent Film Award and an official selection at the Raindance Film Festival, stars Perry as a washed up, former "rock god" who takes a frustrated teenager under his wing.

Rights to the picture were recently acquired by Spotlight Pictures.

So he thought about Megadave for a grand total of four minutes and now Mustaine gets an implied movie credit. Yeah...uh-huh.

Dave made fun of Luke at a Megadeth concert in the 90's for his bogus style. Luke just wanted his approval. Luke's father wouldn't let him listen to Megadeth but now Luke doesn't live at home anymore. Now Luke will get Dave Mustang's attention.

How much does it REALLY cost to book your favorite band for a show?
Earnings & attendance for A Day To Remember, The All Stars Tour, Wovenwar, more
Against Me! singer has kind words for supposed Slipknot drummer Jay Weinberg
Tim Lambesis and Nancy Grace. Together. On a TV screen.
earnings & attendance for Ozzy, Faith No More, Ministry, Coal Chamber, more