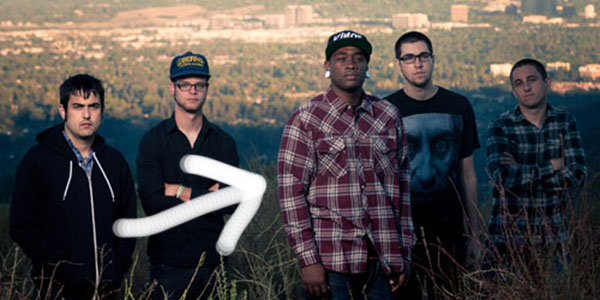 Malone says that despite his dismissal, he is still featured on some of the final mixes. To get even (albeit, playfully), he has released one of the album's tracks with his own vocals. Here is Malone's explanation:


"We recorded the song 'White Pig' last year, and the band decided to kick me after the first vocal session. When I heard the final mixes, to my surprise I was still featured on a few tracks. Getting them to include my credits for my parts in the begining seemed impossible, so I knew then that I had to release the same song, on the same day with my raw, uncut vocal tracks. I love these guys for life but let's get it poppin. #shotsfired #blackpig"

Here is "Black Pig" (if you haven't heard the album version, "White Pig," stream it here):

band has gotten progressively worse since old guitarist passed away

WAYYYYYYY fckIN BETTER! I can't stand the new vocalist. Sounds like a 15yr old emo kid having a temper tantrum.

The new singer is serviceable however this dude has great vocals.

^^^ Nothing in that sentence is remotely true.

second post guy is thinking admiral angry i think. i think brandon's is great, there is more emotion then the standard hardcore metal scream.

band is horseshit. wahhhhh my friends kicked me out.

I've always enjoyed this band and all the other bands these dudes have done (noriega, benoit, admiral angry). I support it all. I still enjoy the new album and vocalist, BUT I probably like Trae's vocals more.

I think Trae Malone is a fcking pssy!! What a bitch to post this. Get over it gay.

Yeah prefer this dude with mild changes in his scream as opposed to that emo-core taco voice cranked to herpes-minge agitation levels the whole time. I've had noisy queefs scream in my ear next to me at shows and it's a grating experience, so having the puberty-stricken teen crackle screaming at me for 4 minutes isn't really all the great dude. Don't know or care about the politics or who-fcked-who's-gf crap, but the not-white guy should be singing this obnoxious horseshit.

This crap sucks. There's no way lambgoaters would have anything nice to say about this band before or now. All these positive comments just seem like the vocalist is on here commenting and saying good things about his own vocals.

Don't care for this band but out of curiosity listened to both versions. The black dude's vocals are way better and I can't see how anyone could disagree with that. Wonder why they kicked him out

what a massive mistake tossing this guy. it literally sounds like two different bands. And the one Malone is far superior. I remember hearing their follow up album to I am God Songs and thinking how the album was salvaged by this guys vocals. Not that it was bad but I am God Songs is superior. Everything after those two albums is pretty mediocre. But this last one would've made up for their third release if they had Malone.

How much does it REALLY cost to book your favorite band for a show?
Varg Vikernes (Burzum): "I no longer play metal music"
battle over: Ne-Yo vs. Hawthorne Heights
Chuck Billy and Testament pissed off some people in Indonesia
today's stupid t-shirt, brought to you by I Declare War