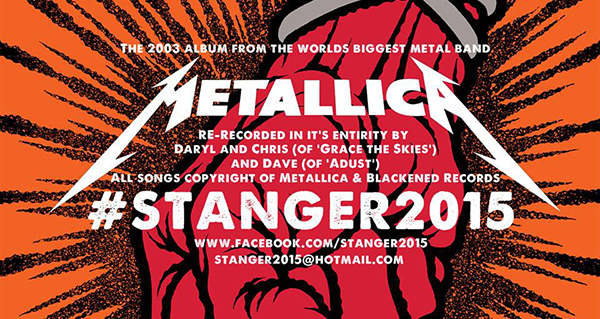 Well, three guys from the bands Grace The Skies and Adust decided to re-record Metallica's 2003 album St. Anger in its entirety. Here is the official description of the project:


Recorded during a turbulent time in the bands career, St. Anger has always divided opinion. Some longtime fans were turned off by the drop tuned riffs and raw production, whilst some listeners embraced it, myself included. #STANGER2015 is for the listeners who weren't so fond on the record back when it was released in 2003. Recorded from the ground up, the album has been shortened by 16 minutes, yet every riff and lyric is intact, resulting in a more concise and focused record.

The production is also more conventional, and we hope that Metallica fans appreciate this new version of an album that is always looked at as an anomaly in the incredible career of the world's biggest metal band, Metallica.

You can listen to the whole thing below.

They do still suck. I'm sorry but Metallica hasn't been Metallica since 91

While it does sound better this way, the album itself still isn't that great, agreed though, they haven't been a good band since the 80s man.

still blows. metallica is like the story of samson - cut off their hair, lost their strength.

at least his snare drum does not sound like someone throwing rocks against an empty oil barrel...

At least the snare doesn't sound like a coffee can.

Bob Rock really should be executed for his crimes against metal for the production of the original. Everything does sound a lot better. Still not anything great, and that damn retarded "my lifestyle determines my deathstyle" line makes me want to choke every member of this band. Would've been cooler if they added in solos.

why would you want to remind people that this album exists?

Of all the Shitallica albums to cover, they choose St. Anger. Great. Just great.

I Am Not Be Another Follow The Trend Monron Who Is Antimetallica.And Call Them Queers.in Fact They Are One Of The Best.They Got Better After Cliff.And The New Stuff Is Not That Bad.The Hell Talking About.And Hammett Still Delivers.Have Ever Listen To Those Crappy Blackmetal From Norway Bro?Justice For All on My Top List.

How much does it REALLY cost to book your favorite band for a show?
watch Every Time I Die guitarist stop onstage selfie with karate kick
true stories? Or urban legends?
Venom frontman Cronos says Henry Rollins is "a fool"
Terror frontman Scott Vogel calls The Ghost Inside 'bullshit band'