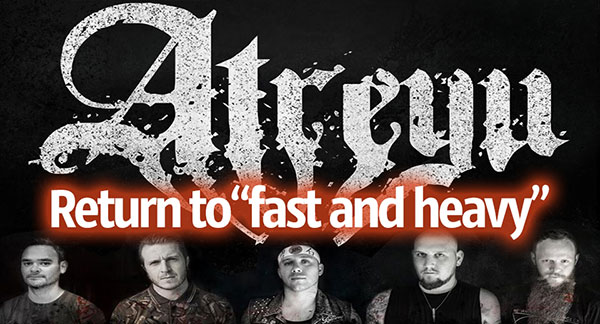 If you're one of those people who enjoyed Atreyu's early material but stopped listening to them when they started abandoning metal and embracing rock, pay attention. In a new interview with Australian magazine Hysteria, Atreyu drummer Brandon Saller was asked to expound upon band frontman Alex Varkatzas' recent online declaration that the band's comeback album would feature "tons of screaming and shredding" but contain "none of that major-label BS."

Saller had the following to say:


"For us, there was never a situation of too many cooks in the kitchen when we moved to the major label. We have always been a band that experimented with new sounds and new styles, trying to expand on what we have already done. What Alex is saying with that 'no major-label bullshit' is the new music we've been toying with is unapologetically abrasive. There's nothing very radio about it. There's nothing pop about it.

"We're trying to get back to where we were when we first started the band; all we wanted to do was fucking destroy a 300-person-capacity club. We just want to go back to fast and heavy.

"We've written and recorded a few songs, and it's coming up awesome, but we are trying to keep our mouths shut on this."

"I'll say this much: it's very heavy, and a punch in the face for heavy metal fans."

Since the interview was conducted, Atreyu has officially entered the studio to begin tracking the aforementioned new album. Stay tuned.
Tags: Atreyu

Regardless if this band is relevant anymore or not, I am stoked.

can they go back to not sucki....oh wait. they always sucked.

Great...that white washed sushi chef is still in the band.

^ is that the guy who used to look like the hamburglar?

"I can't recall a time when these mallcore queers were fast or heavy." This.

He pretty much summed it up himself, it's like a punch in the face to metal fans.

Will definitely listen to the album when it comes out. Was a big fan in 7th grade. Stoked. fck you

this band was never fast nor heavy