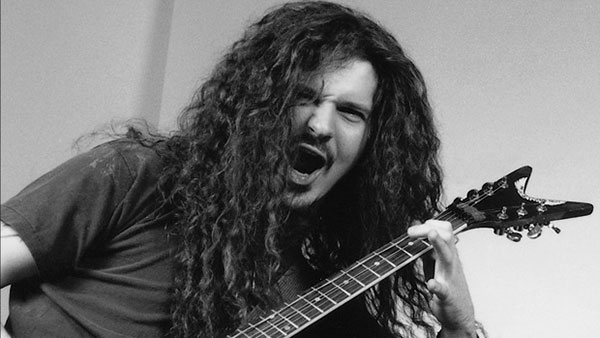 It was ten years ago today that iconic guitarist Dimebag Darrell, real name Darrell Lance Abbott, was shot and killed while on stage. During the shooting, Abbott was performing with his band Damageplan at the Alrosa Villa in Columbus, OH.

The gunman, Nathan Gale, shot Abbott three times in the head before killing three others and wounding seven. Gale was killed by police officers shortly thereafter. You can read our original news article on the shooting, posted shortly after the incident occurred, here. Motives behind the killing remain unclear.

Despite his short life, Abbott had already solidified his legend as the pioneering guitarist for Pantera, arguably the heaviest band to ever top the Billboard charts (with 1994 album Far Beyond Driven). Dimebag was ranked No. 92 in Rolling Stone's 100 Greatest Guitarists list. He had a style all his own, and has influenced an entire generation of metal guitarists.

Today would be a good day to listen to Vulgar Display of Power.
Tags: PanteraDamageplanDimebag Darrell

Vulgar Display of Power it is. Thanx webby.

^ Seconded. Will be listening to Pantera today. Dime was a good dude, he is missed greatly.

DISABLE COMMENTS. THINK OF THE FAMILY

i will mourn a stage persona i never met personally because i can you dumbass. i met his music personally. that is all people need.

gone to soon ..but never forgotten ....you are missed dime

How much does it REALLY cost to book your favorite band for a show?
Motorhead frontman Lemmy worth less than $650,000 at the time of his death
true stories? Or urban legends?
King 810 brings guns to a guitar fight
Pay SUICIDE SILENCE $150 And You Can Be Their Roadie For One Show