Alright, so a few days ago, Massachusetts record label We Are Triumphant came up with a new way to get Facebook likes. Take some popular YouTube videos, rip said videos, and upload them to Facebook. Specifically, WAT uploaded a few vides from Jared Dines, a few of whose videos we've featured as of late. WAT's plan worked really well. One of Dines' videos "10 styles of metal," was shared via We Are Triumphant's post roughly 40,000 times. 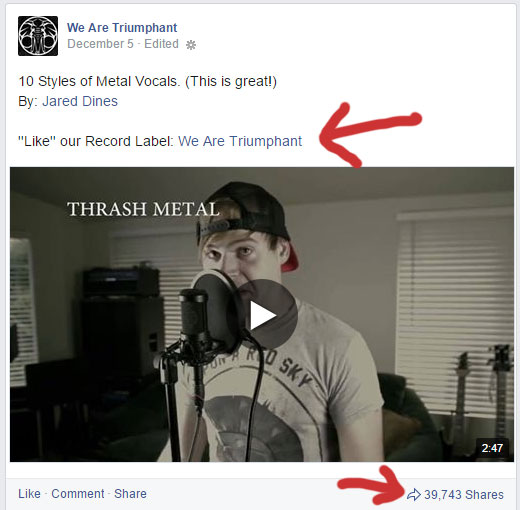 That's a lot of Facebook shares. The other Dines videos WAT posted proved popular as well, albeit less so. All things considered, the We Are Triumphant page went from 66,000 likes to over 80,000 likes in less than three days. That's 14,000 likes, which is something many organizations pay hundreds, if not thousands, of dollars to garner through Facebook promotional campaigns.

Unfortunately, it does little for Mr. Dines himself. While WAT's Facebook post of "10 styles of metal" has been viewed over 2 million times, Dines' original YouTube upload of the same video sits at 455,000 thousand views. That means that Dines earned YouTube ad revenue for the YouTube video, but doesn't make a penny (at least directly) from WAT's viral post.

We've been friendly with Greg and We Are Triumphant in the past, but this was a pretty shady move on his part. I couldn't help but mention it on WAT's Facebook page yesterday: 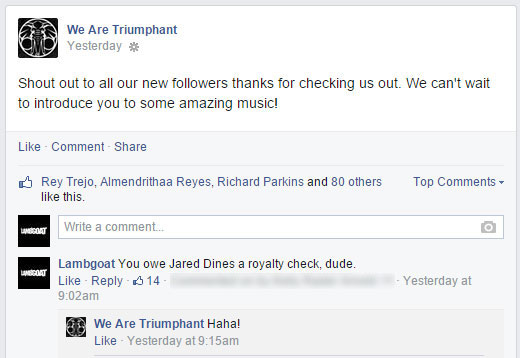 Of course it didn't take Dines long to notice either:

Today, Dines uploaded a new video, one titled "Things sketchy record labels say," and it's obviously directed at We Are Triumphant. Here's the video:

Just minutes later, We Are Triumphant shared that video too, only this time they posted the actual YouTube video.

Alright, my head hurts.
Tags: We Are Triumphant RecordsJared Dines

Am i the only one who doesn't find it that bad? They credited the maker of the video, which people are allowed to do.

literally credits him. Gets him millions of views....

anonymous posted 13 minutes ago Am i the only one who doesn't find it that bad? They credited the maker of the video, which people are allowed to do. No, you actually aren't allowed (from a copyright standpoint) to rip someones youtube video and put it on facebook even if you credit them. The whole reason people like Dines put stuff on youtube is to make money. He doesn't make money and when its on facebook but we are triumphant gets likes from Dines work. Its lame.

Aside from ripping off the YouTuber props to Greg for finding a new way of getting Facebook likes for paying for Ad's which barely ever work.

To the people that don't understand. They ripped his video and uploaded it as their own so literally no attention was givin to the original video meaning it didn't help anyone but WAT so stop acting like you know what you're talking about. Just because they tagged doesn't do anything for getting paid.

This dude really isn't funny and he's a real doucher but WAT isn't much better, so they're a pretty solid fit

They ripped his fcking video OFF OF YOUTUBE and uploaded it to their page. WHY THE fck would they need to do that? They could've just shared the fcking link. It IS that bad.

Having been approached by WAT just 2 months ago to sign a contract, I can verify that this guy is 100% on the mark with EVERY bullshit line Greg slings your way. fck Greg Long and fck We Are Triumphant.

"at least greg found a way to advertise without paying for ads that rarely ever work" fyi: they rarely ever work for you because your band is terrible. It works for good bands :) But since it doesnt work for WAT that must mean they get shit bands.

Doesn't matter that they credited him; what matter's is if they posted the youtube link and video so he can get the views and revenue etc. The video has been seen by seen 2million times on facebook but he's not gegtting paid for that because they decided to upload it to facebook themselves rather than just link the video

Rey Trejo, Almendrithaa Reyes, Richard Parkins and 80 others will now be affiliated with the goat for life... f*kkk

Everyone involved is a gay.

So, people need to pay royalty check for sharing youtube videos on their page??? :/ maybe you're taking facebook "likes" too seriously

It amazes me how people still don't understand what happened. They did not share his YouTube video, they stole it and posted it as their own. Even if they gave Jared credit, it is still terrible from the copyright standpoint-and moral standpoint- if you ask me. If they were a big-time record label, they would most likely be looking at more trouble here. They should have just shared it from YouTube... Dick move.

People are so jealous of We are Triumphant. They are doing way more than you are with your lives. It seems to me that when a random facebook page rips a video of youtube it doesnt matter but when WAT does it, its such a big deal, I mean look at Rings Of Saturn, they pretty much stole memes to get popular but now everyone thinks they are the dopest band ever. The moral of the story is the jealousy is real.

This label is a joke with joke bands on it. F*uck social networking labes like WAT, having a lot of "Likes" on your page on a popular site doesn't mean anything.

"People are so jealous of We are Triumphant." fck off Greg

I'm not sure whether some of you get the point or just don't care... if the latter you're an idiot. An entertainer needs to be able to support themselves right? A little income from doing what you love to do only helps everyone involved. Those youtube ads generate income for the uploader, which from my understanding gets greater as they gain more views and larger companys' ads start showing for your viewers. Maybe not a ton, but every bit helps right? Sounds like straight theft to me.

How much does it REALLY cost to book your favorite band for a show?
Varg Vikernes (Burzum): "I no longer play metal music"
true stories? Or urban legends?
Jared Dines vs We Are Triumphant and 'Things sketchy records labels say'
Adam D. is loaded! You believe those celebrity net worth websites, right?!