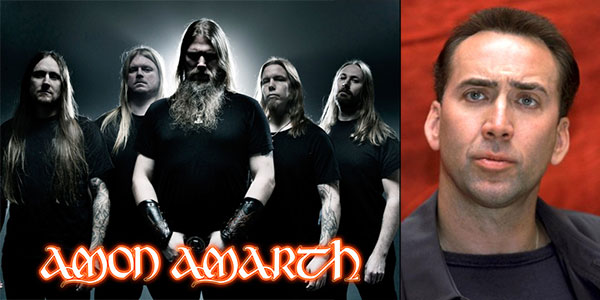 Wes Cage (aka Weston Coppola Cage), the son of actor Nicolas Cage, recently conducted an interview with Journey Of A Frontman to coincide with the release of his new single, "Tell Me Why (Matriarch Of Misery)." According to the 23-year-old musician, he and his father have already seen Lacuna Coil and Rob Zombie together. Here's what Cage had to say about bonding over music with his father:


"The last concert we went to was Mötley Crüe in Vegas where Tommy Lee almost started a fight with me. (laughs) We went to see Lacuna Coil with Rob Zombie, they played together. That was great. I want to show him Amon Amarth, that's one band that I really want him to get into because we both have a love for Viking mythology and anything Norse. My dad has always liked Nine Inch Nails, that was always on in the house. He listens to a lot of Rob Zombie. He was also playing a lot of classical music such as Beethoven, Bach, Mozart, and Chopin. All these outstanding composers were playing throughout the house. I think that's maybe what molded me the most and brought me to wanting to compose. When I was eighteen, I binged on nonstop symphonic classical music. I did not stop listening to counterpoint and things that I wanted to branch into a little more and Beethoven helped with that."
Tags: Rob ZombieLacuna CoilWes CageAmon Amarth

Garland Greene will toss your salad.

cmon Nic, we can do better than NIN and Rob Zombie. His son should see the shirt Graf Orlock made to honor his dad.

Song sounds like something Bam Margera would pleasure to.

people who have friends on Facebook but not in real life are stoked.

he should take his dad to acting classes, because he is f4ggot

I wonder what he did to piss TLee off. He's a very chill person.

WHO GIVES A fck ABOUT THIS? HONESTLY

he should take his dad to acting classes, because he is f4ggot This had me dying lol

How much does it REALLY cost to book your favorite band for a show?
Easter play accidentally uses Lamb of God logo on tickets
The Ataris frontman melts down during show, hates his own drummer
watch what happens when trash cans enter a mosh pit
Kids cover Slipknot in video reinterpretation of 'Duality'