This morning The Dillinger Escape Plan took to Facebook to honor the artist who created the artwork for their One Of Us Is The Killer album:


"Two years ago the giant undertaking of recording this album was underway. The importance of the perfect visual representation of our songs and themes, as captured by the original artwork of Brian Montuori (who also created the artwork for Miss Machine), can't be overstated."

When The Ghost Inside unveiled the artwork for their new album 'Dear Youth' two months ago, more than a few people on the Internet noticed some similarities to the aforementioned DEP cover.

It may be a coincidence that Dillinger chose to publicly acknowledge the One Of Us Is The Killer cover within 24 hours of The Ghost Inside releasing their new LP, and it may not be. Either way, if there was any uncertainty as to how DEP feels about the new TGI artwork, Dillinger cleared things up just hours ago while responding to comments on their Facebook post (see below), calling The Ghost Inside cover an "offensively soulless rip off." 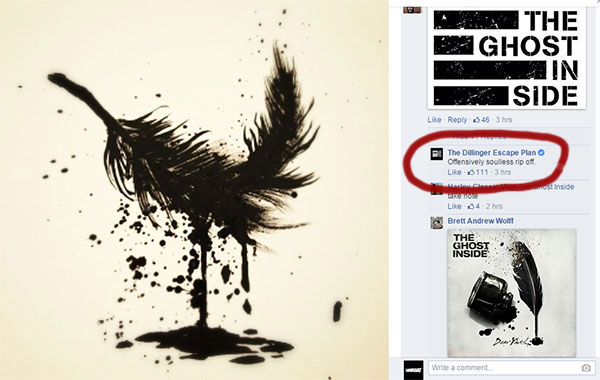 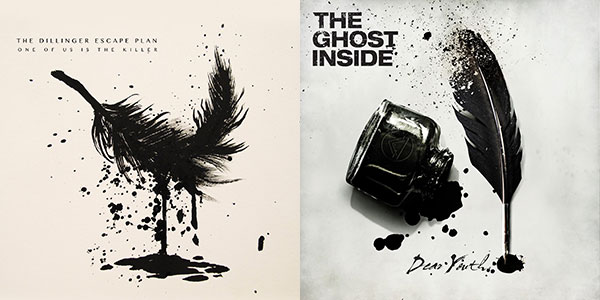 UPDATE: When we posted about this on our Facebook earlier today, a few people said that they thought Dillinger was commenting on the fake Ghost Inside logo, which was made to look exactly like DEP's logo, not the cover artwork. While Dillinger's comment was technically a reply to that post, it doesn't seem like something they would say about an obviously fake logo. I'm pretty sure they're referring to the album art.

This morning we asked DEP guitarist Ben Weinman about the comment and its intent. Unfortunately, Weinman wasn't even aware of the comment and after checking it out said that it was posted by one of the other page moderators (he didn't know who was responsible).

We asked him directly if he thought the art was a rip-off and here's what he had to say:


"If I saw the two next to each other, I would have personally asked to make a few changes and not make the vinyl the same... I mean I wouldn't have let that slide personally but I don't give a shit what other bands do... I do feel bad that those guys have to deal with all this drama right now during the release of their album. I'm sure they worked really hard on it."
Tags: The Ghost InsideThe Dillinger Escape Plan

Both seem to be a rip off off Drive Like Jehu's Yank Crime.

Not close enough to be an offensively close rip off

Isnt this the artists fault? Not ghost insides? The artist should have an idea of other bands artwork in the realm of album covers. Unless the ghost inside do their own art work...then i can see the issue.

^^ it's not called a feather pen. You should try going to school you dumb homo

What about the Sleeping with Sirens album 'Feel' artwork

Its missing an entire object from DEP's cover. No where near a "souless ripoff" guys, cmon. \m/

I thought the same thing when I first saw them. It doesn't matter that they're not completely similar, but the albums came out within a year of each other. TGI (and their artist) should've been aware of this.

The artist is for a ghost inside is DEFINITELY to blame, it is his/her job to advise their client against plagiarizm, but the whole band is to blame too. Those brainless morons probably showed the cover to the "artist" and said "we want this...but different" good job AGI you're all brainless retards with no original thought of your own. The two covers are way too similar for this to even be a question of whether they ripped of DEP.

I never thought the feather was all that original but TGI's logo font and fade looks very similar to the main logo that TDEP didn't use for this version of the album. And the object beside the feather looks like it was taken right out of the inside of the One of Us is the Killer booklet. It really is similar to Dillinger's artwork for this era. If you only look at the cover then you won't see that. That doesn't automatically make it a rip off though

DEP you fell off the face of the fu**ing earth in 2004. Shut up and cry somewhere where someone cares. Way to say something upon TGI album release just so you could hype your atrociously adrift sound and band. 35 year old record store losers are stoked.

^ settle down vigil, you're still not a hardcore band

Sorry DEP, you don't own the rights to all black feather pens and ink. This doesn't even look similarly designed, to be honest.

Could be way off, but in that picture it looks like they're replying to the picture above. You know, the troll one that is definitely a Dillinger logo. Article flip.

because an artwork like this is original af anyway, huh? fck both lack creativity

So.. TDEP owns any kind of art with a ink feather in it? HAHAH! No..

shortly after TGI posted the album artwork on instagram (which was weeks before the album actually came out), there was a comment from DEP's page that said something along the lines of "really guys...?" that was quickly deleted why is everyone freaking out about it now?

I agree with anonymous!

I think its heavily borrowing from DEPs artwork. It doesnt matter that the objects are similar its that fact that the stylizing is way too close. You can do a quill and ink wells all day long just stay away from the style which is already out there and that's already popularly known. For me its the splattered texturing that puts it in DEPs territory. Artists, Designers, and Illustrators should avoid similarities and want to be original.

That's not even J Bannon's style. Either on them

Newsflash: BOTH of these album covers suck shit. The fact that they can get away with calling themselves an artist should be a fcking crime.

who the fck even pays attention to album covers in these download/stream/digital days of music? better yet who the fck listens to music anymore?

Taylor Gorman is a rapist and a child molestor.

The whole TGI album is a rip off. From the beginning BMTH riff, to the lyrics "For whom the bell tolls", to the album artwork. Not to mention the shit production... I'm pretty sure I'm forgetting something. Oh yeah, this album blows, HARD. I used to to love this band, but they have become generic.

Wow so not only do you all know nothing about branding and intellectual property but you are also retarded. Way to go.

Atleast the album cover will be scene by people this time. Hah

Vigil is so huge

How much does it REALLY cost to book your favorite band for a show?
watch what happens when trash cans enter a mosh pit
true stories? Or urban legends?
Motorhead frontman Lemmy worth less than $650,000 at the time of his death
Tyler, The Creator calls Bring Me The Horizon's Oliver Sykes a "Tumblr F*g F*ck"